First a word to the cautious

Start with Part One here

We slept a few, quick hours in our comfortable room at Lvovi Hotel on a quiet side street near downtown Tbilisi. (I just this moment notice the logo for the Lvovi Hotel is a rose.)

We woke at 8:30 to endulge ourselves in the Lvovi large breakfast spread. Lia had said they would pick us up at 10 to beging our first days's adventure. My internal clock, which of course had to be igmored, was trying to remind me that it was just after midnight, home-time. But the sun had risen over Tbilisi hours ago.

We walked out into the bright morning, and pink roses greeted us on both sides of the narrow street. I hadn't seen them when we arrived in the dark. 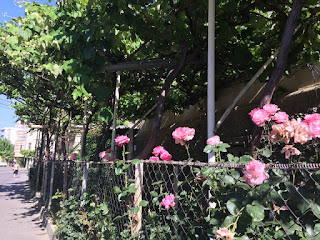 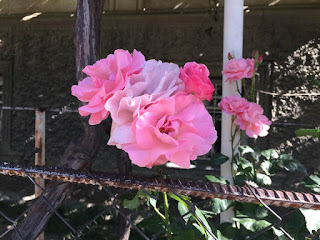 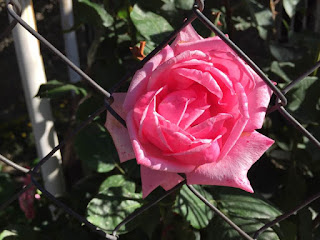 A white van arrived and Lia and Elene jumped out, introducing us to our driver for the week, Misha. We had no idea where we were going each day. Our trip had been played out for us in advance. Thankfully. We simply needed to get in the oversized Toyota van each morning, with Misha behind the wheel, and off we'd speed on the next adventure.

I'm going to pause right now for the benefit of anyone who might have admired my shared first photos and immediately booked a flight to the Republic of Georgia. I need to stop you right now and issue a warning.

Yes, by all means, visit Georgia! It is a stunningly beautiful country, and her citizens are hospitable, funny, generous, and loving people. Before our trip, I read that Georgians consider visitors a "gift from God," and we were treated as such, as loved and treasured family members.

My half-in-jest warning comes about the driving. Do NOT rent a car and drive yourself . I repeat, Do NOT attempt to drive yourself around Georgia. Do not rent a car and try to navigate the roads on your own. The roads in Georgia are filled with cars manned by drivers like Misha. I will write more about dear Misha, our driver and tour guide, in future posts. I even told him I would be writing about him and his remarkable driving.

Misha used to drive a sports car. I suspect Misha still has a little sports-car-driver left in him. Misha is a friend of the family, or related my marriage. He was not a blood relative of our Georgian family. As I wrote in the first post about our trip, Misha replaced our first tour guide four days before we left on June 2. His fee was $700, compared to our first tour guide's fee of $1300. Don't miss that little story here.

Several of the eight days of our visit, Misha, Bruce, and I were on our own, exploring the ancient sites of Georgia, a country of 26,911 square miles, just over twice the size of my home state of Maryland, which is a relatively small state.

Misha's speeding and whiplash stops, even in downtown, and passing when, in my humble opinion, wasn't safe seemed to alarm no one but the Americans in the van. Or at least one of the Americans. As we were darting in and out of traffic, I noticed Lia and Elene were not phased. Although seat belts are not required to be worn in the backseat in Georgia, I wore mine at all time, as we three girls rocked all over the back, hanging on to anything bolted down, trying not to land in each others' laps around curves.  Misha would think I was exaggerating. Maybe I am.

At first I thought Misha was an anomaly. Then I noticed everyone drove like Misha. Other cars pulled out in front of us as often as Misha cut others off. And the truly amazing thing was , I witnessed not road rage. No one was offended when Misha almost ran them off the road. And he didn't get mad when others did the same to him. There were no angry horn blasts, no ugly faces, and no obscene hand gestures. Everyone seemed to respect that some drivers were more in need of getting to their destinations first. I wonder if stress-related heart disease and blood pressure ailments are less in Georgia. 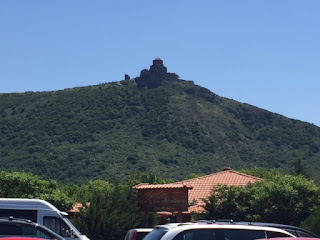 Our first stop of the morning was at the sixth century Jvari Monastery. We could see it long before we arrived, as it set atop a mountain, as so many fortresses and monasteries do along the Gerogian landscape.  I'll share those photos on my next post. First I needed to get this public service announcement out, in case friends are standing at Hertz Rent-a-Car counters somewhere in Georgia.
Instead, you might want to hire Misha to do your driving for you while you are visiting Georgia. We are living (operative word here being living) testimonies that he safely drove us around for six of our eight days, and succeeded in bringing us back to Tbilisi alive and better for the journey. As we parted ways on our last night with Misha, I cried bitter tears.

Posted by dbmichael at 9:47 PM