Getting There, Day One


As we sat on a jet awaiting departure from Dulles International Airport on June 2, 2017, I couldn't avoid thinking of a similar evening, fifteen years, one month, eleven days, and three hours earlier. So began, a decade and a half ago, my first book, But the Greatest of These is Love. Thankfully, I am not that same terrified, self-absorbed mother who was bound for Russia that April evening in 2002 to bring home a seven-year-old boy God would not let me forget. Back then, I struggled to trust God when He promised I could love His Hand-Picked boy who waited at the other end of our journey as much as my older bio children, and as much as my own life. Roma made God visible to me. God slipped in, with infectious Roma, and changed my life. 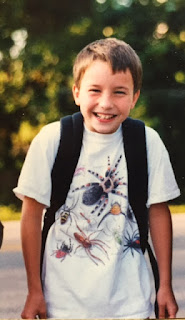 With over twenty four hours of total travel time, from our door to the hotel in Tblilis, I had a long time to think about this journey. I'll be honest. I have been reluctant to begin this last part of my journey with Roma. It's like "wrapping it up," like bringing it to a final conclusion. And that is hard. What can I possibly write about after this last part that will excite readers like the draw of a new Roma Story? Perhaps I continue to write about Roma in an attempt to keep that dear boy alive. How long can I accomplish the impossible?

Roma always made God visible for me. I tell his stories hoping readers see God too. The comments and private messages from readers over the past few years, some who never knew Roma, or me, confirm the strange effect Roma has had on people. 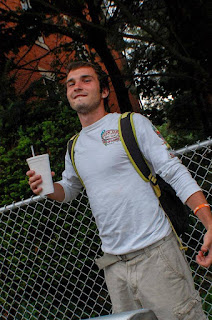 Everyone felt like they knew Roma, they loved him, and were always on the sideline, rooting for him. Many people joined in prayers for Roma when he rebelled, and praised God when God went after him. They learned of Roma's accident and death, on this blog, and they mourned for Roma with me. And they followed along and read about the miracles of the pink roses, and had hope, as Roma continued making God visible. Roma was always God's boy, on a mission from God to all of us. As I look back and see Roma's story as a whole, it is truly an amazing story. I am humbled, and thankful, in spite of the profound grief, that God chose me to be a part of His Story.

Over the years God has been changing me. It is a process until Roma greets me with his big smile and open arms. I no longer have a faith that is a mile wide and an inch deep. And that dreadful suffering has indeed brought growth to my soul. God used that little boy from Russia for my transformation. For that surprise Gift, I will be eternally grateful until I reach eternity. Roma has made Heaven a brighter destination.

And speaking of destinations, there is this story about the Republic of Georgia. The dreaded conclusion of Roma's story, and yet, the place of healing and redemption I knew I would find. And I know I must tell . . .

The first leg of our journey was heading into rush hour traffic, some of the worst in all the nation, on a Friday evening. We left just our home in suburban Maryland just before 5 p.m. to accommodate traffic, parking, security, and shuttling to get to Qatar Airways inside the enormous airport complex. The first flight of more than fourteen hours to Doha, Qatar, on a Boeing 777. Our very expensive return flight, due to my careless booking, (see last post) was flight 707,  I settled in, feeling like Angels were escourting our plane. Seven is Roma's signature number. 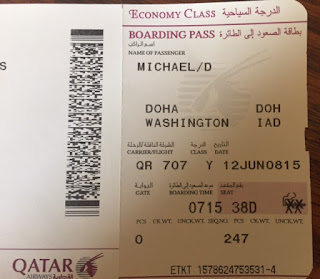 I was thankful the screaming toddler was in the row in front of us, in the center isle away from my window seat,  instead of directly in front or beside us. We took off at 9:30pm, and they began serving our dinner at 10:30. Qatar Airlines serves ample food. I wrote a little in my journal, and then watched one movie, Hidden Figures which I highly recommend, and by 1a.m. by my internal clock, I was asleep.

*FYI - Here is a link to Qatar Airlines to get a look at a similar plane. They mention "delectable dining options," and while I would agree, the photo, if you scroll down, is not representative of  any of the meals we were served.

When I awoke, many hours later, the toddler was still screaming. I had slept through our early morning snack, a large turkey and cheese sub wrapped in plastic was still on my tray, and they were now offering bags of chips before breakfast was served. Bruce was on his fourth movie. Poor Bruce doesn't sleep on planes, and I could've slept wedged in the cramped luggage compartment with a leg hanging out.

Perhaps sleep was an escape for me. There were moments when the magnitude of this journey smacked me full in the face and my tears flowed. We were actually going to see Roma's family for the first time, for eight days. And without Roma. Those moments of loss were just too much.

So after a good night's sleep and plenty to eat, I exited the plane rested and, remarkably, not even stiff from my sedentary hours, with only one trip down the aisle to the bathroom. The aisles were so narrow and often blocked, mostly from the attendants in their never-ending attempts to feed us.

Fourteen hours after they corralled us in to the giant crowded double-wide air bus, they corralled us out. The plane windows had been closed soon after takeoff, at 9:30 p.m., and again, upon landing, it was getting dark.

After a three hour layover in Qatar where we tried to walk a lot for exercise, we boarded a smaller plane for a three hour flight, to Tbilisi.

I spent the three hour flight allowing myself to ponder the possibilities. What if we didn't "hit it off." What if the language barrier turned out to truly be too much. My friends from North Carolina say I sounded like a Yankee, but my Maryland friends assure me this simply isn't true. I would have to remember to talk. Slowly. And. Deliberately. And. An-nun-ci-ate. Each. Word. (Out of habit, I continued that practice for several days upon returning home.)

I decided I couldn't worry about any of the what-ifs. God had led us to this journey. It would all be worth it. I knew I would have stories to tell.

At 12:20 a.m, on Sunday morning,our plane landed in Tbilisi, eight time zones from home. We completely missed Saturday. As I gathered my carry on, my heart doubled its pulse rate. I knew Lia, at least, would be waiting beyond the luggage claim for us.

When we went out, I could see her hands wildly waving beyond the barrier, and others with her, and hear them calling our names. When we got our luggage, which was, of course, the last to appear, we went out, tears streaming down our faces, as Lia, her twenty-year old daughter, Elene, and her husband hugged and kissed us. We chatted happily as Elene translated. They delivered us to our Tblisis hotel and left us around 1:45 a.m., with plans to pick us up at 10 in the morning. 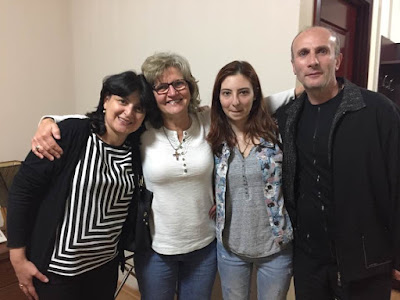 And I felt God smiling about His itinerary for the week. It was easy to imagine Roma was right there beside God, because now, God makes Roma visible, and because Roma certainly wasn't going to miss a moment of the excitment!

Continue with Part Three, A Caution partly in jest.