With so much history learned and shared in earlier posts, I managed to get all of day two in this post.

Bruce and I were on our own with Misha in the white Toyota van on Monday morning, again, not knowing where the day's adventures would lead us. As I reflected on our many and varied activities so far, it was hard to believe we had spent only one day.

I mentioned Misha's driving in an earlier post, Part Three . Again, I will repeat, don't drive yourself around Georgia.

Bruce chatted away with Misha. I listened from the back seat, tightly buckled in, mostly lost in my day dreams, as usual. I wrote occasionally in my journal, although my writing was almost unreadable, with Misha's quick passing techniques and swerving on windy and bumping roads, or swerving to miss cows in the road, or people, or sheep. The radio played music that was often sung in English, a version of Michael Jackson's Billy Jean, and some other older Amercian songs redone by Russian artists that Misha liked. One often repeated was sung by a sultry woman, and by the end of the week, I could sing along at parts. "Bang, bang, my baby shot me down." I wonder if Russians and Georgias singing along know what the words mean?

Misha chatted happily with Bruce in the passenger seat. His English wasn't great. He was "self taught." But we could almost understand him, when he wasn't excited and talked too fast. When Bruce asked him a question, he would look over at him, really appearing interested in what Bruce had to say.

I didn't  talk much to Misha from the backseat. I didn't want him to turn to make eye contact with me like he did with Bruce,  and take his eyes off the road. Even while watching the road,  and his quick responses, Misha made driving decisions that made me close my eyes and hold my breath.

How ironic that I might die on this trip. But I could almost hear Roma say, "Not today, Mom."

Misha's hands reminded me of Roma's. His fingers didn't taper, but were the same width all the way to their blunt ends. Misha was not a relative, but a friend of the family.  And he gripped the steering wheel like Roma did. And I bet, if Roma drove with Misha, he would have wanted to drive like Misha. And Misha and Roma would be buddies in no time. 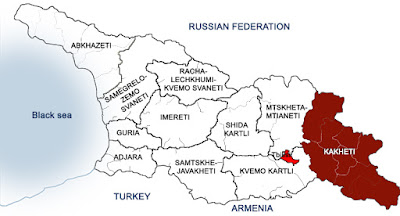 I decided I was best off not watching his passing techniques around hairpin turns with oncoming traffic. Instead I would look out at the astounding beauty of the countryside.

We drove about an hour and a half to the region of Kakheti before we parked. Misha explained that this was the burial place of St. Nino, and a destination of pilgrims over the centuries. Read more about St. Nino, the fourth century female evangelist credited for converting the ancient Kingdom of Iberia to Orthodox Christianity. In her later life, she withdrew to the area of  the Bodbe Gorge, in Kakheti, where she died 338 - 340 AD. To memorialize her, King Mirian III had a small monastery built where she was buried. 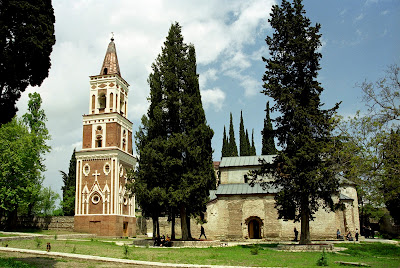 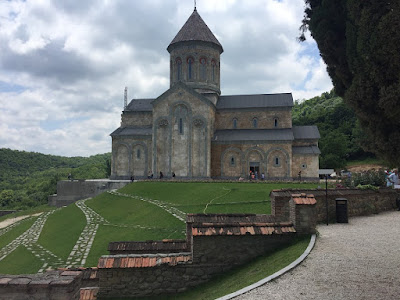 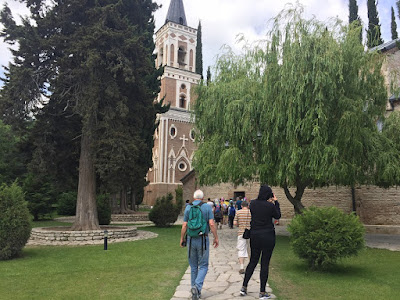 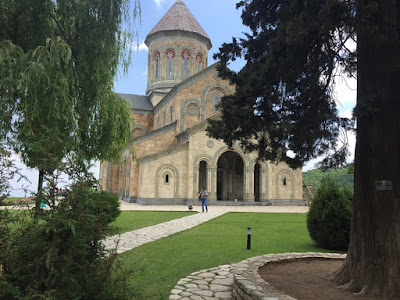 The lovely and revered site gained prominence during the Middle Ages when the kings of Kakhet chose it was the location of coronations. The monastery was pillaged in 1615 by the troops of Shah Abbas I of Persia. It was restored soon after by the Kakhet king who reigned until 1648. The monastery was then operated as an important religious book depository.

There are three churches on this property. as well as dwellings for the busy nuns. 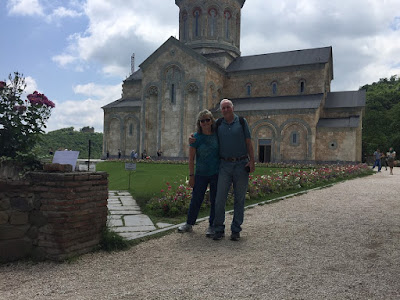 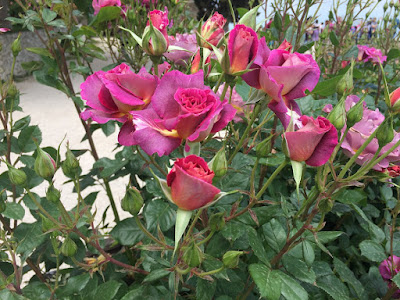 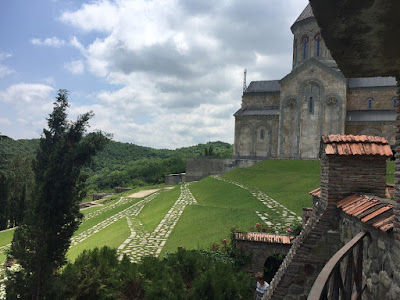 In the 1800s the chapel housing St. Nino's relics was refurbished. Nine years later, Tsar Alexander III of Russia visited and reopened a nunnery on the premises. Once again a convent, Bodbe operated a school where painting and needlework was taught. But, in 1924, the newly empowered Soviet government closed the convent and opened a hospital. When the Soviet Union dissolved in 1991, no time was wasted in returning  Bodbe to a convent. For the next decade, restoration efforts were ongoing. 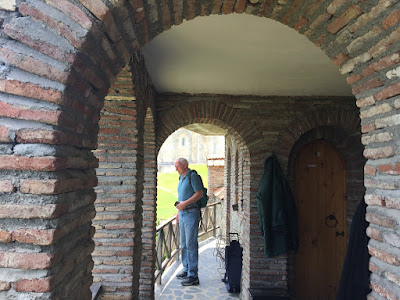 Today, once again, the monastery, nestled in tall cypress trees, functions as a nunnery, Bodbe Monastery is a destination for thousands of visitors and pilgrims each year. The nuns tend the vast and beautiful gardens, orchards, and vineyards. 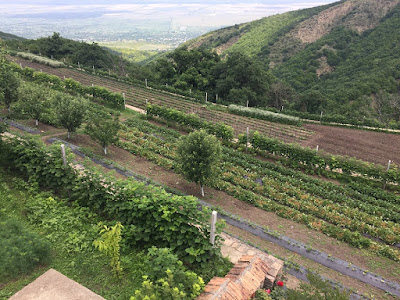 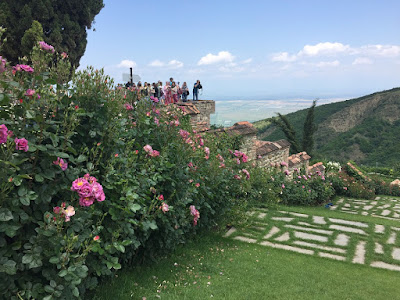 Next we drove a short distance into the town of Sighnaghi. Unfortunately the museum is closed on Mondays. But we walked around the lovely little town, running into a cousin from the night before who took us to the market where her mother sold churchkhela, or homemade Georgian Snickers. She cut several strings of the hand dipped candy for a gift for us. We walked to the crest of the hill where the ruins of an old fortress stood. Our time there was short because it was just a stop along our way to wine country, and beyond. 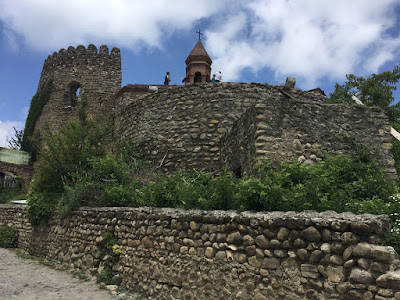 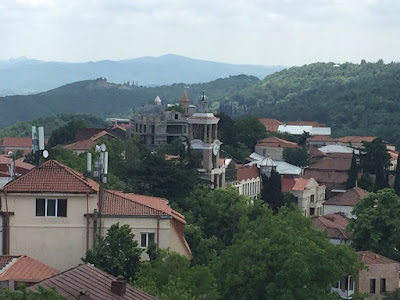 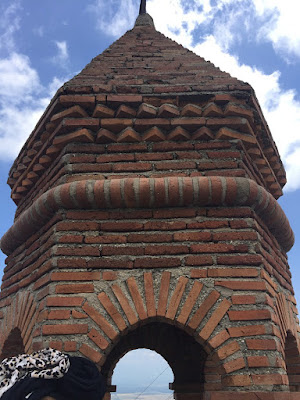 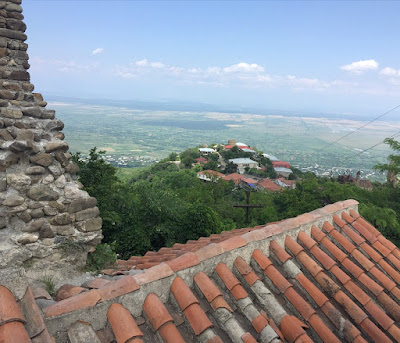 Our third stop was as a winery. Georgia is widely recognized as the motherland of wine, dating back to about 6000 BC. For the most part, winemaking technology has changed little since the first successful techniques. Grapes are still harvested by hand, and still pressed by foot. The juice ferments without additives, with not water or sugar. Many Georgians make their own wine according to the ancient tradition. 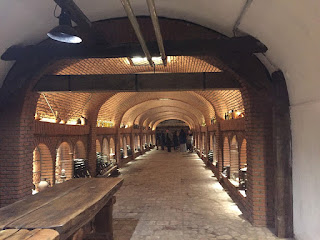 We ate our late lunch high about the winery, overlookiing for vineyards.


We made one more stop at the Church of the Archangels, Michael and Gabriel in Gremi, about a hundred miles from Tbilisi. Gremi was the capital of the ancient kingdom of Kakheti in the 16th and 17th centuries. It was a flourishing trading town on the Silk Road and a royal residence, with the church and a palace on the nearby mountain top. The town below was razed to the ground by the armies of Persia in 1615. The town never regained its former prosperity and importance. 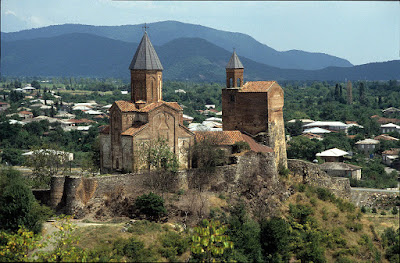 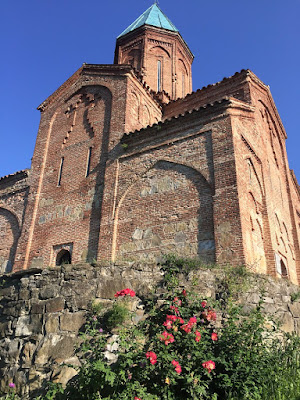 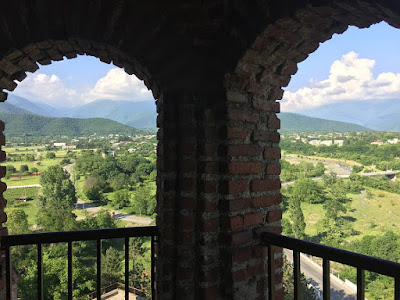 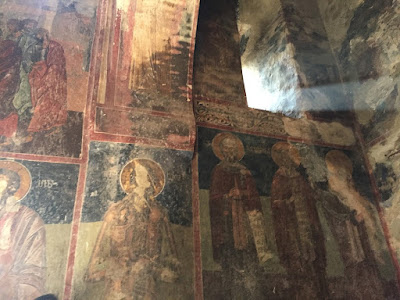 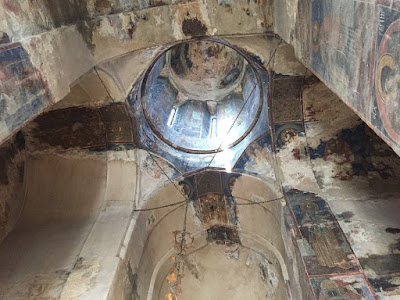 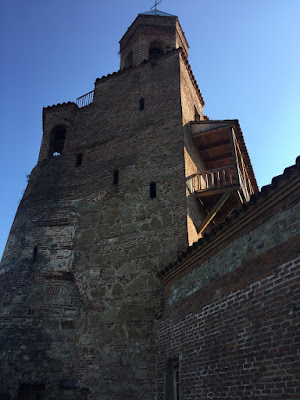 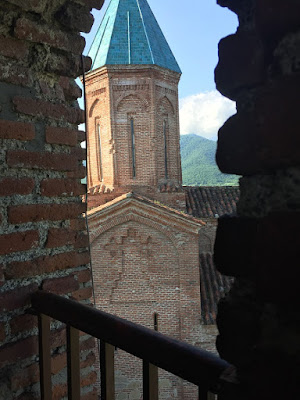 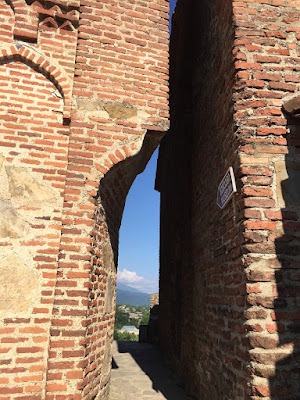 The oft repeated history lesson from our proud tour guides during our visit was "We (Georgians) built these magnificent structures, and the Persians and the Mongols destroyed them, and we built them back. The survival of the Geogians is a testament to their fortitude. And their faith, as set forth in this excellent video, To the Last Drop of Blood.

When we returned to our hotel, old people might have been ready to call it a night. But not us. Lia, Elene, and a cousin a cousin we met the night before, Tamara, picked up us around 9 p.m. Tamara, or "Tako," 28, is a funny and brave young woman, who owns her own car and drives in Tbilisi. And she drove quite responsibly. I asked Elene if she drove, and her eyes got big and she shook her head emphatically no. So, it wasn't my imagination that most drivers in Georgia drove like maniacs? Elene concurred with my observation.

We went into downtown Tbilisi on this Monday evening where the night life was just revving up. We took the cable car to the top of Mtatsminda. It was evident that Lia had many fond memories of this place, with its amusement park and gardens. How nice it would have been if Lia, a walking arm in arm, could just chat with one another about our thoughts of this monumental coming together of two families, and our experiences together. But I was thankful for the two young and gracious and patient English speakers, Elene and Tako. After walking around and looking at the sparkling city far below of central Tbilisi at night, we ate at the popular Funicular restaurant, a favorite attraction in the city since 1905. We had to rush to get on the last cable car down at midnight. Otherwise, we would have been required to take a taxi. No big deal. But it was exciting, rushing to the cable car with minutes left and boarding the last car of the night.


Another full day. A full stomach. And very full heart. I am so grateful.

Dont miss the exciting and heart breaking stories about finding this lovely family. Begin with Hope for Restoration.

Posted by dbmichael at 5:01 PM