After four exciting excursions on that first day, we were heading to dinner. Bruce and I were clueless from one destination to the next, where we were heading next. We just got in the white van as we were led. I didn't know if we were  going to a restaurant, to Lia's house, and I couldn't think of any other options. We were going to eat with family, we were told.

We drove an hour, mostly through rush hour traffic that came to a standstill at times on a two-lane road that ran along a popular park. Families unpacked cars for lakeside picnics as children wandered into the slug-like traffic.

Misha, our driver for the week, didn't like slow cars in front of him. I would hear him occasionally offer advice to the other drivers. I know he was telling them to "go." How often had I witnessed Roma offering similar counsel to other drivers, even if, like now, there was no place "to go."

We picked up Maia along the way. Maia is an English teacher at the University. Maia and I had corresponded on Messenger several times, when we wanted to make sure our message was correctly translated, and didn't trust Yandex.com. We had even spoken on the phone. I already felt that Maia was a friend, and was excited to see her in person.

We finally made it out into the countryside and away from the traffic. Lia and Maia directed Misha down several dead ends before we finally found the right long driveway to the "Ranch." 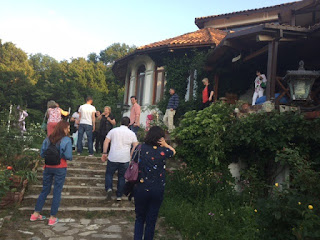 The Ranch was bustling with cars pulling in and people walking up to the big front porch. I wondered if the Ranch was a restaurant or maybe a resort, with its large estate, huge swimming pool and vast, panoramic views of the mountains.  Then I noticed the people were bringing food and greeting one another with hugs and kisses. This, we were told was Georgio and Marina's home. All these visitors were family members, some who had driven considerable distances, gathering at the Ranch, to meet us. It was a humbling realization. We were the guests of honor.

There were lots of introductions. Georgio and his wife, Marina, were the owners of the Ranch. Marina was a dentist by day, but also very talented with decorating and making the Ranch her project for the past twenty years. We toured the spacious home and beautiful grounds. It was a wedding venue, and a bed and breakfast. Georgio, who spoke English, invited us back to stay there when we brought the whole family next time.

I was glad to learn that Zaur (rhymes with cow) or Zauri, as his cousins endearingly called him, would be there with his wife. Zaur begun messaging me in English early in 2015, shortly after we found the family. Over messenger, he shared family photos and gratitude that we had given his cousin's son a good life. I was excited to meet him in person. I recognized him as he climbed the steps to the porch with a  dozen red roses. My tears, always close to the surface, spilled over as he offered me the roses and big hug.  I excitedly started chatting with him. He held his hand up to stop me. "Sorry Debbie, only leetle English," he said apologetically.  I guess he had always translated his messages before sending them to me. Kind Zaur had sent me birthday, happy Fourth of July, Happy Election day--God Bless America, and Merry Christmas greetings through the year. 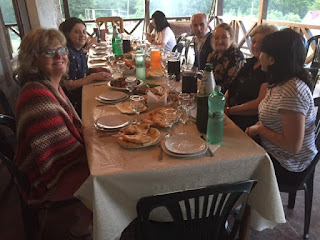 I had wondered if anyone would resent us for taking their cousin Igor's son. No one there that evening had ever met Roma, but this family who gathered to greet us this beautiful Sunday evening in June, was well acquainted and dearly loved Roma's father.

A few cousins, as we were introduced, apologized for not knowing the trouble Igor's family was facing across the northern border in Russia in the early years of the new millennium. Before social media and cell phones, families didn't have instant access to one another. Igor's father, Romani, was the only family member to leave Georgia to go to Russia in search of a job. It seemed to have been the undoing of a close-knit Georgian family. When Lia learned the children had been taken to an orphanage, she tried to help from Georgia, offering a home for Roma and Liana, his older sister, who we would meet later in the week when she arrived from Russia. Lia was flatly denied access to her own family members, even though she had the desire and the means to help them. To complicate matters, Georgians were not permitted to cross the Russian border. While still attempting to find a way to help, Roma was suddenly gone, as our adoption seemed to have been fast tracked for reasons we didn't know.

Of course we knew nothing of this extended family. And they knew nothing of us. Would anyone resent us, as Americans, a country who represented THE enemy throughout the Soviet years, who had taken their cousin's son away, just as family members were attempting to save him. The reversal of that scenario  I can almost imagine: What if a former Soviet had come and adopted a family member away from us who we were desperately trying to save. It scares me to think of what negative feelings I might harbor.

But this close, big-hearted, and generous family, who so obviously shared my son's precious DNA, didn't resent that we were the reason Roma vanished in 2002. They approached us with warm hugs and kisses. The two sisters of Romani, Roma's late paternal grandfather, now in their eighties, repeated "Спасибо," Spah-see-boh, over and over, "Thank you"

Any trepidation I might have had instantly melted away in the presence of their warmth. When they weren't close enough to hug and kiss us, they were sitting across the table during dinner, blowing us kisses, with the sweetest eyes of gratitude I have ever seen.

Cousins offered toasts again and again from pitchers brimming of homemade red wine all around the table covered with a feast of fresh fruit and vegetables and traditional Georgian food. They toasted, thanking God. They toasted us as wonderful parents. To the health and happiness of our other children. I lifted my glass to my dear sister Lia, for all she had done to organize our trip. Bruce thanked everyone for their generosity, as Maia translated. And in perfect English, Zauri, speaker of "leetle English" said, "To Debbie, the best Mother in the world." Between toasts, I told them our friends told us to find out where Roma got his big heart, wit, and personality. The cousins pointed to Zauri's mother, as she blew kisses, and smiled a revealing glimpse of mischief.

My heart was so full. So was my stomach. 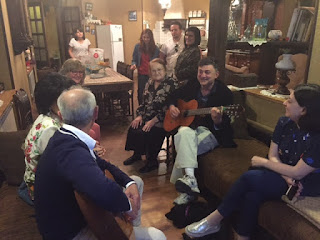 After dinner, while Georgio was fetching his guitar, and the family was gathering in a large room, Zaur, who knew only "leetle English" began to sing in perfect English, the Beatles' "Girl."  "Is there anybody going to listen to my story all about a girl who came to stay? She's the kind of girl you want so much it makes you sorry. Still, you don't regret a single day," and then the rest of us chimed in, "Ah, girl. . . girl." That got the singing and dancing started in earnest.

I watched this close family.  Their interactions. Their boldness and wit and generosity, and vitality, trademarks that were also hardwired into the little Sudszashvili cousin I had the privilege to raise. The body movements, the arms slung around buddies. The confidence. The love of fun and family. I am confident Roma would have fit right in and competed for attention.

I may regret till my dying day that I did not find this dear, loving, generous family earlier, to ease their distress about the safety and well-being of Igor's "disappeared son." Roma was one of their own. But finding his lost family was an extremely emotional experience for Roma, even at age twenty-one. Would he have been ready to dig up old wounds from early childhood  prematurely? I'll never know. But this connection now, this evening in June, eighteen months after Roma left on his own adventure, laughing, crying, showing Roma's pictures, telling Roma stories, singing and dancing with Roma's blood relatives, God used to heal us all.

Over the past eighteen months I'm always talking to Roma. "Roma, are you here?" I will ask. And I can always almost hear him say, "Yeah, Mom, I'm right here."

"Did you see all this tonight, Roma? You have a great first family. What a privilege to meet them.  Actually, your second family isn't so bad either! Aren't we blessed?"

Maybe knowing God has Roma, safe and sealed, helps me not be so devastated by his crushing absence. Losing Roma would be too much. But in fact, I haven't lost Roma at all. Loving his first family helps me understand that Roma will always go on in a Cosmic complexity about which I only have a hint. But I will gladly and thankfully take it.

Thank you, God for this gift.

See some actions videos and more photos below.

And Roma, who shared this DNA, would have been dancing too. 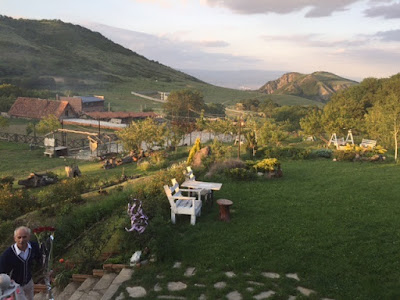 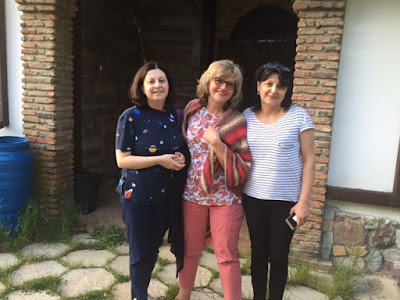 Dont miss the exciting and heart breaking stories about finding this lovely family. Begin with Hope for Restoration.

Posted by dbmichael at 4:08 PM