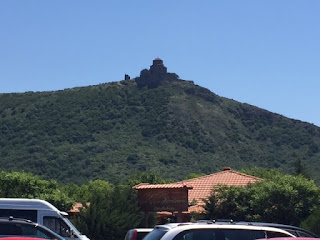 As Lia pointed to the ancient structure perched on the faraway, towering mountain top, she smiled at me, eyebrows raised, hinting that was to be our first stop of the morning.

The Church of the Cross, or Jvari Monastery,  in the city of Mtskheta was a half-hour drive from our hotel. I was surprised to see only English as an alternate language on road signs and museum and church markers right under the undecipherable, rounded Georgian alphabet. I saw no Russian Cyrillic anywhere. Perhaps this former Soviet state had purged all remaining vestiges of that seven decade occupation of the Communists. This is a country who, in her long history, has known many occupiers. Today, Georgia is a free republic.

Our guides mentioned Saint Nino often during our week together, and with such reverence and familiarity. It was as if they assumed we knew her too. I knew more research was required on the young woman credited to bringing Christianity in the early fourth century to pagan Georgia, then known as the Kingdom of Iberia. You need to learn a little about the history before you can understand Georgia's treasures.

Saint Nino (296-338 or 340 AD) born in Cappadocia, a Roman province in present day Turkey. She was a niece of Saint George. When she was twelve, her devout parents left her in the care of a nun for her religious upbringing who taught her about Christ's life and his suffering. Nino learned how Christ's Robe, His Seamless Tunic had arrived in Iberia, a pagan nation. (I'll write more about this when we visit the church where it is believed to have been taken.) 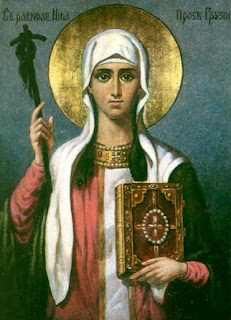 Later, while living in Rome, Nino was convicted to pray to  the Virgin Mary, asking to be allowed to travel to Iberia, over 1500 miles away, to venerate the Sacred Tunic removed from Christ before his crucifixion. It was a seamless garment, woven my Mary for her son. Matthew 27:35 modern translations speak of casting lots to divide up Jesus' garments, but Georgian tradition says it actually means they cast lots to see who received this one revered garment, because it was without seam and most unusual, and very valuable. The garment was sold to a Jew who eventually carried it to the Kingdom of Iberia.

Mary heard Nino's prayers, and appeared to her in a dream, telling her to go to that land to preach the Gospel of Jesus, and Mary would be her protector. The dream frightened Nino, who questioned if it were a real Visitation. In response, Mary presented her with a cross of grapevines and proclaimed, "Receive this cross as a shield against visible and invisible enemies."

When Nino awoke, she was holding the cross in her hands. She dampened it with her tears of rejoicing and tied it securely with her own hair.

Before she left Rome, Nino baptized almost forty virgins who consecrated their lives to Christ. The Roman Emperor at that time, Diocletian (284-305), a ruler infamous for persecuting Christians, took a liking to one of them, Rhipsimia, and wanted to marry her. The forty nuns escaped to Armenia. The furious emperor sent his soldiers to follow them, and sent a message to alert King Tiridates (286-344).

King Tiridates intercepted the women, but he, too, was charmed by Rhipsimia's beauty and resolved to marry her. When she spurned him, the king had her tortured to death, and almost forty other nuns beheaded. Saint Nino, being prepared for a greater task, was spared by hiding among some rose bushes. (Yeah, that got my attention too!)

Nino finally arrived in Mtskheta alongside a group of  pilgrims coming to venerate a pagan god. Nino watched with great sadness the people tremble before a powerless idol. She prayed, "Oh Lord, send down Thy mercy upon this nation . . . that all nations may glorify Thee alone, the One True God, through Thy Son, Jesus Christ."

Saint Nino made her home beneath a bramble bush in the garden of the pagan King Mirian III. The gardener and his wife were childless, but through the prayers of Nino, God granted them a child. The couple rejoiced and declared that Christ was the True God. Wherever she went, those listening converted to the Christian Faith in great numbers.

King Mirian was not pleased with the attention Nino was getting in his village with all the talk of this Jesus. His gardeners claimed Jesus, through this young woman, had cured their childlessness. Then his own wife, Queen Nana fell deathly ill, and Nino used her power to heal her too. Queen Nana also confessed that Jesus was Lord.

While hunting, King Mirian determined to have all the Christians killed. But now his plot would also kill his wife for failing to renounce Jesus. During the hunt, the sun suddenly darkened. All alone, King Mirian was terrified, and he prayed in vain to his pagan gods, to no avail. Then he turned to Christ and prayed, "God of Nino, illumine this night for me and guide my footsteps, and I will declare Thy Holy Name. I will erect a cross and venerate it and I will construct for Thee a temple. I vow to be obedient to Nino and to the Faith of the Roman people!'

Suddenly the night fell away, and the sun shone again. King Mirian gave thanks to the Creator and surrendered his life to God. He returned home to inform Saint Nino of his transformation, and declared the Kingdom of Iberia to be a Christian nation in 326 AD. He called Saint Nino the Enlightener, and Equal of the Apostles.

Modern astronomers have attributed the miracle of King Mirian to a solar eclipse on May 6, 319. 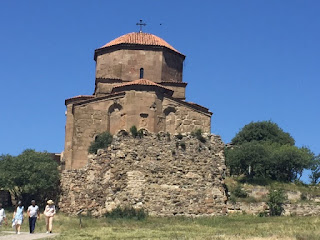 His Christian faith continued to grow. Saint Nino, who is credited to converting the country to Christianity, erected a large wooden cross on the site of a pagan temple. The cross is reported to have been the site of miracles, and therefore drew pilgrimages from all over the Caucasus. A small church was built over the remnants of the wooden cross in c. 545, named the "Small Church of Jvari." The present monastery, the "Great Church of Jvari" was built between 590 and 605. The octagonal base of the original cross is still preserved in the church.

The importance of the monastery and grounds increased and attracted more pilgrimages during the late Middle Ages, when a stone wall and gate were added. During the Soviet era, the church was preserved as a national monument, but no visitors of congregants were allowed to the Holy site. When Georgia gain independence, the church was restored to active religious use. 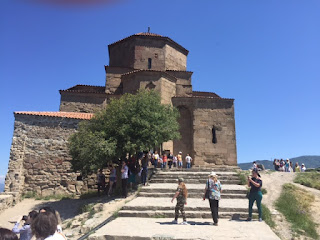 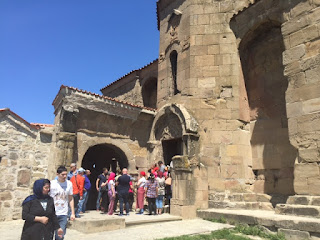 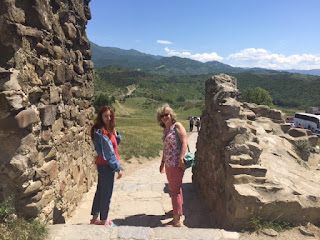 The Church of the Cross, or Jvari Monastery, commissioned by the first Christian King of future Georgia was the first of two UNESCO (United Nations Educational, Scientific, and Cultural Organization) protected sites that we visited on our first day in Georgia. 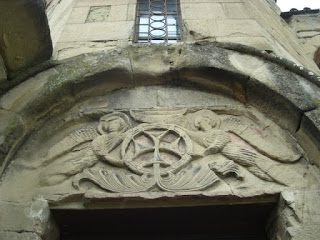 You can see more photos here.

Continue with Part Five here
Posted by dbmichael at 11:31 PM