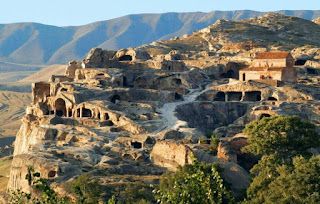 After lunch we headed to Uplistsikhe, about an hour's drive from Mtskheta.  Identified by archeologists as one of the oldest urban settlements in Georgia, Uplistsikhe literally means "the Lord's Fortress. " It dates back to the early Iron Age (1200- 600 B.C.), and older by some archeologists' estimates, and to the Bronze Age (3000- 2400 B.C.). Some later structures were added during the Middle Ages, or Medieval period, a thousand years from 500 A.D.-1500 A.D, which began with the fall of the Roman Empire until the rise of the Ottoman Empire. It was an important religious,  political, and cultural center. Situated above the Mtkvari  River, the city stood directly on the path of the old Silk Road and was a strategic and commercial center.  The Silk Road was used regularly from 130 B.C. when trade from China was officially opened to the west, to 1453 A.D. when the Ottoman Empire boycotted trade with the west and closed the routes. 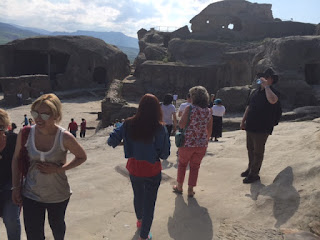 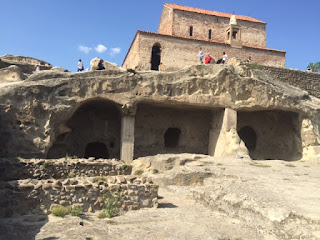 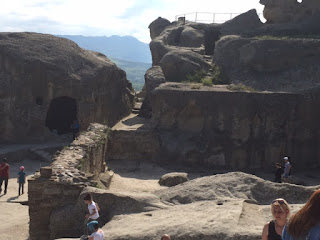 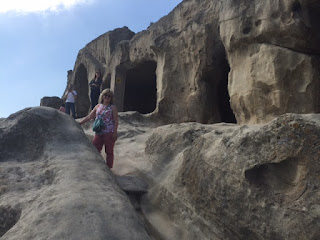 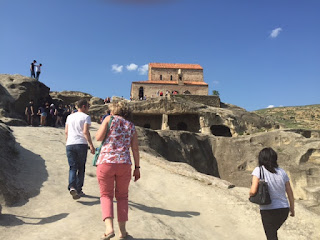 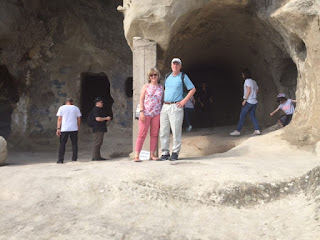 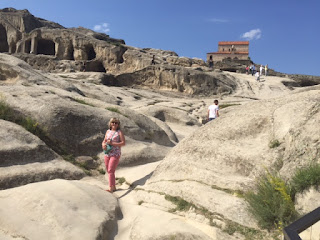 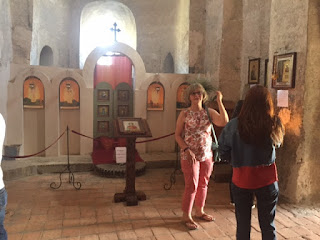 When Christianity came to Georgia in the fourth century A.D. in Mtskheta, and later Tbilisi, Uplistsikhe declined in importance. However, Uplistsikhe remerged as a principle Georgian stronghold during the Muslim conquest of Tbilisi in the eighth and ninth centuries. The Mongols raids in the 13th century marked the ultimate collapse of the town, and it was virtually abandoned except for an occasional temporary shelter in times of foreign invasions. The Mongols invaded Georgia in 1220 and again in 1231. At that time the Kingdom of Iberia included present day Georgia, Armenia, and much of the Caucus countries, including all or parts of Azerbaijan, Iran, Russia, and Turkey.


Georgia fell under the domination of the Ottoman Empire in the 15th century. During the 18th and 19th century, it transitioned from being a mainly Iranian centered country to a Russian annexation.

Several of the most vulnerable areas were completely destroyed by an earthquake in 1920. The stability of the monument remains tenuous.


The living quarters and areas for communal purposes occupy a cliff of almost 2o acres. They are connected by steps carved into the stone. The majority of the caves are devoid of decoration. There is a large central meeting hall has coffered tunnel-vaulted ceiling and a palace complex. The natural sandstone made it easy to create carvings of intricate patterns.

There is a basilica from the 6th century, and a three-church basilica built out of brick in the 9th and 10th centuries. Later churches were added during the medieval period.

When we visited the National Museum in Tbilisi, we saw many of the ancient artifacts discovered from the archeological excavations, such as gold, silver, bronze jewelry, and ceramics and sculptures.

After leaving Uplistsikhe, we stopped briefly at another church. I am sorry I can't remember the name.  (Those names were pretty tricky!) We drank "holy water" from a spring, and I didn't even fear I might get sick. I felt protected and inviceable. 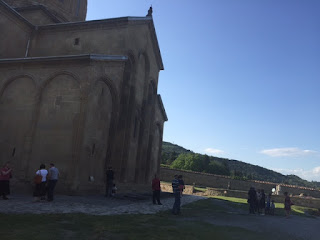 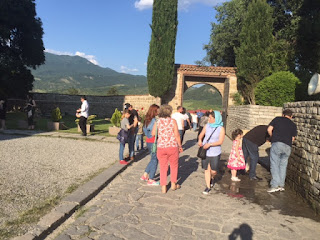 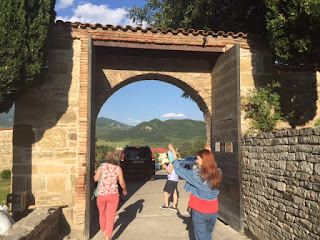 We are still on day one! It was hard to believe we had gotten off the plane in Tbilisi on this same date, just after midnight.

Next stop, a more personal story, dinner with Roma's family.