Canyons and Caves and careful manuvering around living things.

We were instructed to pack a overnight bag for our Tuesday and Wednesday adventure. With no further information, at least in English, we got into the white van on Tuesday morning at 9:30. We drove 175 miles, over three and a half hours, before we reached our first destination. Once out of Tbilisi, the roads weren't crowded. Misha had no problem being the front car in his lane much of the time. I spent my day-dreaming hours scanning the foreign scenery outside my window. There was no mistaking that we weren't in the U.S. anymore. The only familiar site was huge wind turbines on the horizon, but it was not a frequent site where we traveled. The ever-present mountains faded into the distant background as the valley displayed her agriculture, patches of crops, the vineyard, the hillsides dotted with cows and sheep.

I was considering a flaw in the driving system in Georgia. Georgians drive on the right hand side of the road, as in the U.S., but some steering wheels were on the right and some, on the left in Georgia. In the white van, it was on the right, which gave Misha a clear disadvantage of seeing oncoming cars when he was tailgating, which was frequent.

Bruce, who sat in the front on the left side was the one with a clear sight of cars coming around the curves. And the one most in harm's way when Misha darted out to the passing lane, sped up, and when his front door cleared the vehicle he was passing, he darted back into our lane, as the car behind us slowed or moved to the shoulder in order to let him back in before we were hit, head on. I thought Bruce might be safer in the back seat with me, but pretty soon, Bruce was telling Misha when it was safe, or not safe to pass. Gotta love Misha, because he listened to Bruce. They chatted away, as I relaxed enough to take some cat naps to prepare for coming attractions.

Other times, I leaned forward to listen to some of Misha's stories. He is thirteen years older than his wife, who speaks excellent English, he said, and he has a four year old son who likes to play with toy guns. In his fast and broken English, he said his father had died in a car accident. I was thinking that should have made Misha more careful. But what really caught my attention about Misha's story, he said he had a dream about a car accident, and when he woke up, he learned his father had died in a car accident. I watched Misha, his talking-with-his-hands, his belief in something much bigger than us at work in the universe. He reminded me of Roma, and the times Roma was hyper-intuitive, like the time he was a little boy and eerily knew exactly what I was thinking, shared on this blog post, You are Mine. When he was older, and he and I were cosmically connected in an astounding experience, also shared on that same  post. In life, Roma and I were on the same frequency in an other-worldly sort of way. I have been reluctant to let that connection go, and God has been merciful in filling the void with a heavenly assurance. 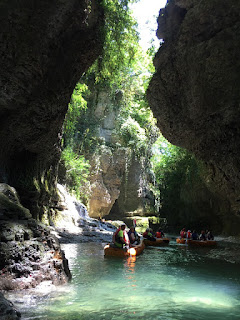 We arrived at Martvili Canyon, a surprising and astoundingly beautiful river gorge. We were excited that today's excursion included a raft ride on this clear blue-green  water. The Georgian government recently made capital improvements on the infrastructure, building overlook sites, bridges, walking paths and docking areas for boats. The canyon is over 1.5 miles long, and 15 to 30 feet wide. The protected area features caves, waterfalls, and jagged rock formations. 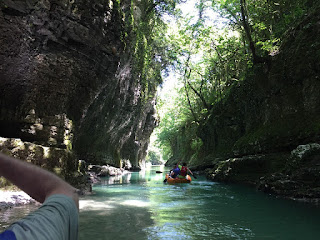 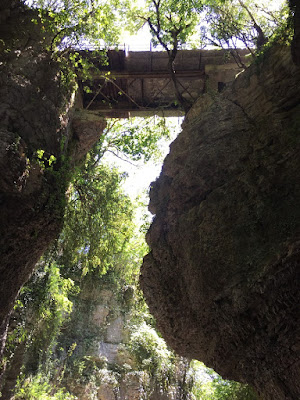 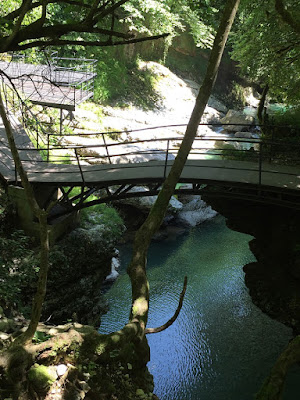 We didn't make this video, of course, but it is worth watching.

After our raft ride and hike up for a better view of the canyon below, we were back in the van heading to the Promethean Caves, and hour drive away. 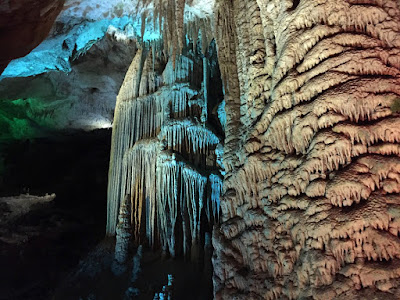 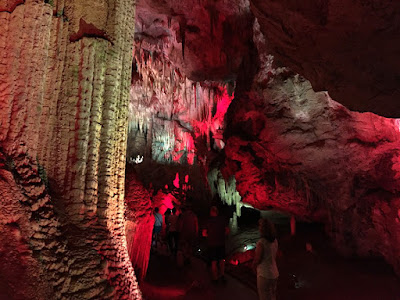 The Promethean Caves, also known as Kumistavi, were discovered in 1984.  With three quarters mile of walk way, and a boat on the underground, it was an unexpected site, very different from anything we had seen. See some better professional photos here. Kumistavi is the biggest cave in Georgia. Although only ten percent of the caves are open for tourists, it takes about an hour to explore walk the manmade paths. There are underground lakes and rivers. The humidty is high, with a constant temperature of 57 F.  Supposedly there are lots of bats, but we didn't see any. 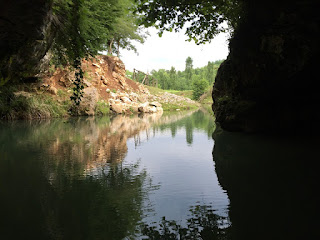 Misha was several people ahead of us in line. We watched him chatting happily with friends he had found. But after a while, we noticed they hadn't previously met, as he introduced himself and shook hands with his new acquaintance.  Like Roma, Misha never met a stranger anywhere he went. I almost had to laugh as Bruce and I watched him work the room, in this case, the cave. We took a little boat to exit the cave.

Back in the van, on the country roads, we passed donkey drawn carts piled high with sticks. Men walked on the roads, sometimes three abreast taking up half the lane of the rural roads, not moving when Misha zoomed around them. I winched, afraid his big side mirror would whack someone in the back of the head. Children played at the edge of the road, and they didn't run off the road as we approached, and Misha didn't slow down. Dogs, sheep, cows, people, children, walked along and in the road, and no one was worried about texting drivers.  Soon, even I settle down. Even enough to nap occasionally. If Misha thought he could get the van through that three foot gap between moving cows or sheep crossing the road, who was I to second guess him? Sometimes it seemed as if the cows favorite meeting place was at the white center line. Sometimes, Misha was truly blocked and could not pass without a certain fatality. Then he would say kindly to the offending cows, "Ladies, ladies, move along." Sweet hearted Misha made me smile.

It was  little surreal when we came upon a funeral procession crossing the road. Those carrying the casket and the those trailing behind didn't seem to mind when Misha slowed just a little, then found an opening in the mourners just big enough to pass on through.

Next we stopped at the Gelati Monastery, a large medieval monastic complex, another UNESCO World Heritage site.  Gelati was founded in 1106 by David IV, David the Builder
(1073-1125). 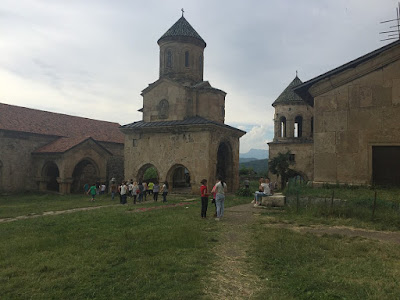 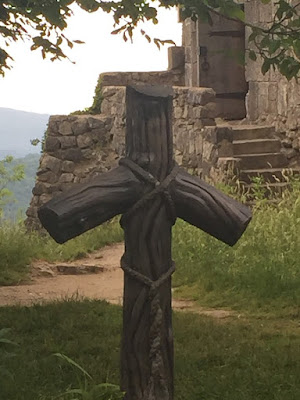 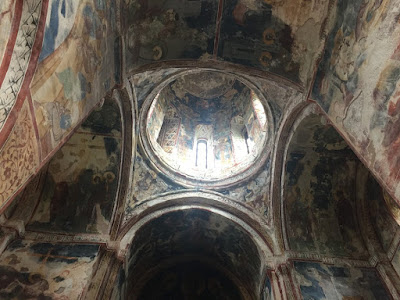 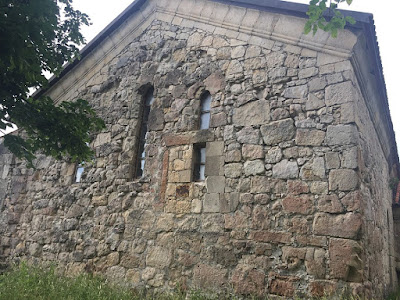 Because we were three and a half hours from our hotel in Tbilsi, we spent the night in the Imereti region at a guest house, what we would call a Bed and Breakfast inn. Our room number was 7, like God was reminding us that He was there, on this sacred journey. 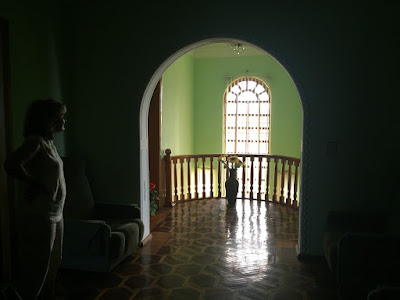 Posted by dbmichael at 3:14 PM