Part five. More history that was new and fascinating to me. I hope you learn something too.

(Start with Part One)

After our morning visit to the Church of the Cross, we drove to the Svetitskhoveli Cathedral, another UNESCO site in Mtskheta. Because of many churches, religious relics, and the visitors who come on pilgrimages, the ancient capital of Georgia is called "the Second Jerusalem." Svetitskhoveli was the largest church building in all of Georgia, until Holy Trinity Cathedral's construction
between 1995 and 2004 in Tbilisi after the fall of Communism, (We visited that impressive church on our last night. Stay tuned.) The present church was completed in 1029, but the original church dates back to the early fourth century and the reign of King Mirian III, the first Christian king of Iberia, converted by Saint Nino. Read about Saint Nino in my last post. 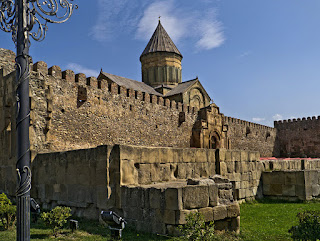 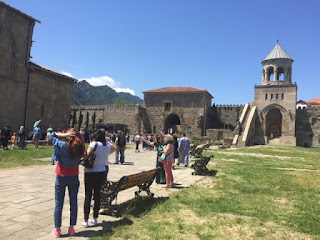 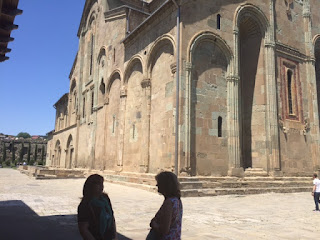 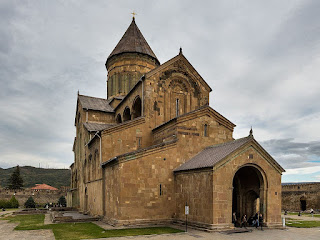 This Cathedral is best known as the burial site of Christ's Robe. The story goes that a Mtskheta Jew, Elias, was in Jerusalem when Jesus was crucified. He bought the robe from a Roman soldier at Golgotha and brought it back to his native city.

According to the Gospel of John, the soldiers who crucified Jesus did not divide his tunic after his death, but cast lots to determine who would own it. It was unusual, woven in one piece, without seam. A distinction is made in the New Testament Greek between the himatia (literally "over-garments") and the seamless robe, which is chiton (literally "tunic" or "coat.") The Septuagint version of Psalms 21: 18-19 reads,

"Then the soldiers when they had crucified Jesus, took his garments (ta himatia) and divided them into four parts, to very soldier a part, and the coat (kai ton chitona). Now the coat was without  seam, woven from the top down. Therefore, they said among themselves, let us not tear it, but cast lots for it, whose it will become. Thus the saying in Scripture was fulfilled: they divided My raiment (ta imatia) among them, and upon My vesture (epi ton himatismon) did they cast lots."

Upon Elias's return to Georgia with the Sacred Robe, his sister, Sidonia, clutched the robe so tightly, she died of joy. The robe could not be pried from her firm grasp, and fearing damage to the precious garment, it was buried with her. Her tomb is preserved in the Svetitskhoveli Cathedral.


From Sidonia's grave grew an enormous cedar tree. Saint Nino came to Georgia three hundred years later, to venerate the Lord's robe. She had the tree cut down to build the first church. She had seven columns  made for the building. The seventh beam had magical powers, and lifted itself into the air. It returned to earth after St. Nino prayed through the night. Only that seventh column oozed a sap that had healing properties. Many people were cured from all diseases. The site because a destination for pilgrimages beginning in the Middle Ages to the present. Because the pilgrims would cut parts of the wooden column to take with them, long ago a stone enclosure was built encircling the holy column. Archeological testing in recent years confirmed the wooden beam in place inside the stone structure built for its protection. 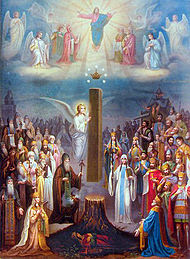 The painting at the right is The Glory of Iberia (1880s). by Mikhail Sabinini, illustrating the legend of the Living Pillar. Saint Nino is standing to the right, with King Mirian III and Queen Nana kneeling on each side. The background is filled with the countless pilgrims to the Holy site.

In Georgian, sveti  means "pillar," and tskhoveli means "life-giving" or "living" so the

Christ's Seamless Tunic remained in Georgia until the seventeenth century, when the Persian Shah Abbas I invaded Georgia and stole the Robe. In order to gain favor with Tsar Mikhail Feodorovich, the Shah sent the Robe as a gift to Patriarch Philaret (1619-1633) and to Tsar Mikhail in 1625. The authority of the Robe was attested by Nectarius, Archbishop of Vologda, by Patriarch Theophanes of Jerusalem, and by Joannicius the Greek. Reports also circulated at that time of the miraculous signs being worked through the Holy garment.


Two portions Robe were taken to Saint Petersburg in 1625, one to the Winter's Palace, and the second, to Saints Peter and Paul Cathedral. Moscow also houses a portion of the garment at the Cathedral of the Dormition. There are small portions at other old temples.

The Russian Orthodox Church commemorates the Placing of the Honorable Robe of the Lord at Moscow on July 10 annually, since it was first placed there on the Sunday of the Cross, during Lent of 1625.

Svetitskhoveli has survived many adversaries over its long history, notably, invasions from Arabs, Persians, and Timor. Many priceless frescoes were destroyed during the Soviet era, by being whitewashed. Also, earthquakes have damaged the ancient structure originally constructed in the fourth century, with additions in the eleventh century.

I'll pause right here and thank Wikipedia and many other internet sources and blogs too numerous to recall, as well as our capable and fast speaking tour guide at the Cathedral. I didn't have time to take notes on site, so I'm relying mostly on the internet for the information provided in these posts. 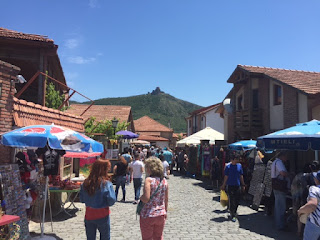 We went on a Sunday. The grounds inside the walls of the complex are a busling little community, with vendors sellling traditional Georgian wares, such  felted toys and shoes, and Churchkhela candy, which at first glance, I couldn't tell if they were candles or sausage hanging from strings over bars.  We dined inside the complex, tasting our first Khinkali (meat dumplings)  and Khachapuri (cheese pie).

Then we were off to Uplistsikhe. Still day one!

My trip last month, June 2-12, I went as a visitor and observer of interesting, holy, and majestic sites. My next trip I will return a pilgrim.

Email ThisBlogThis!Share to TwitterShare to FacebookShare to Pinterest
Labels: But the greatest of these is love, Mtskheta, pilgrimage, Svetitskhoveli Cathedral, the Republic of Georgia