The Pursuit of the Cross, 31 Days of Miracles

(Continued from Day One, Who is our God?) 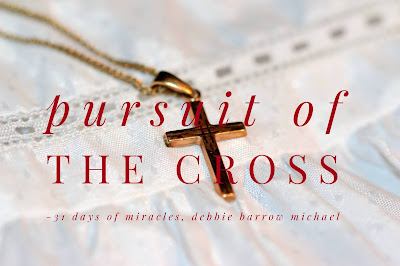 As one who has always had an awareness of God,  I have never doubted the reality of miracles. Yet, not until the early months of 2000, in my fourth decade, was I keenly conscious that God was weaving a miracle into my life.

God had recently whispered, and not very subtly to my unreceptive heart, an invitation to join Him. Even though I knew God well enough to know His Will is always best, I feared His Will would devastate my gods of Self and Comfort.

What had God whispered to my terrified soul? Although I was the mother of three children, ages 18, 16, and 11, God was unambiguous about His intention that my family adopt another child.

I pleaded with God to give me a different mission, but He refused to take no for an answer. The initial, vague theme of adoption gradually morphed into adoption of an older Russian boy. My fears increased.

The challenges of an older child, defined at that time as a child over five, with a possible history of neglect or abuse, sent me into a tailspin of dread. Surely God could find someone more willing and equipped than I for this seemingly impossible assignment! 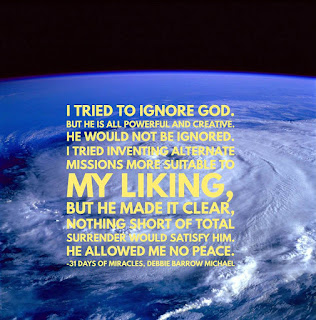 I tried to ignore God. But He is all powerful and creative. He would not be ignored. I tried inventing alternate missions more suitable to my liking, but He made it clear, nothing short of total surrender would satisfy Him. He allowed me no peace. He interrupted my sleep, as I would wake suddenly, hearing someone, or Someone, call my name. I'd sit upright in bed, asking "What?"  But unlike young Samuel of the Bible (1 Samuel 3)  who heard God call his name, I did not answer, "Lord, I am your servant."

Still, God was determined  to transform me.

One evening, as I returned home from a self-assigned mission for God, I heard a soft plink on the wood floor. I bent down to see what had fallen. It was my cross pendant. I grabbed my chain before it fell too. But it was securely fastened around my neck. I was astounded.

I suddenly remembered the exact thing had happened six months earlier. I had thought it odd, and promptly forgot about it. That was before God had opened my eyes to His activity in my life. How many other times had God tried to reveal Himself to me, and I was blind?

How could the cross fall from its chain, with the wielded bale still intact? My husband, a scientist, assured me there must be an explanation. I removed the chain and handed him both components, chain and cross. He sat at the kitchen table as I handed him a magnifying glass. He forced a pencil into the bail, to see if it would separate at a crack in the solder, yet it held firm.

The incident defied explanation. A recently studied Bible verse echoed to me:

"I am the vine; you are the branches. If you remain in me and I in you, you will bear much fruit; apart from me you can do nothing." John 15:5.

Now I was keenly aware of His Presence, and He was saying, and not very quietly, "PAY ATTENTION."

God answered my complaints of His interruption of my safe and comfortable life as He answered Habakkuk's complaint:

"Be utterly amazed. For I am going to do something in your days that you would not believe, even if you were told." Habakkuk 1:5. 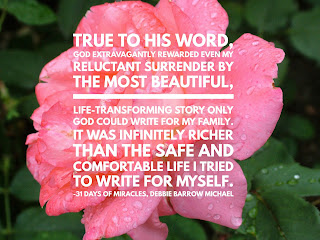 True to His Word, God extravagantly rewarded even my reluctant surrender by the most beautiful, life-transforming story only God could write for my family. It was infinitely richer than the safe and comfortable life I tried to write for myself. God allowed me to experience the powerful and astonishing ways He uses ordinary people, like me, to accomplish His divine intention that we love one another. His Love transforms us.

I share our story in But the Greatest of These isLove.

For the month of October during our Miracles series, I have reduced the price of downloads to $2.99. All profits from my book have always gone, and will continue to go,  to orphan care. 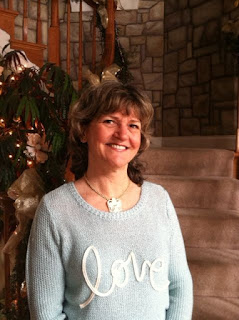 Debbie Barrow Michael lives in Mount Airy, Maryland, in the United States. She is an artist and writer. Her book, Butthe Greatest of These is Love, chronicles her unexpected journey with God into adoption. Her blog, Consider it All Joy, at debbiebarrowmichael.blogspot.com is filled with God Stories, even during a tragic period in her life. Her greatest desire is to know God better, and make Him "visible" to others.

Amazon downloads of But the Greatest of These is Love are reduced to $2.99 for the month of October to celebrate our Miracles blog shares on Write 31 Days.

All book profits go to orphan care.
Posted by dbmichael at 8:26 AM

Email ThisBlogThis!Share to TwitterShare to FacebookShare to Pinterest
Labels: 31 days of Miracles, adoption, But the greatest of these is love, Debbie Barrow Michael, faith, surrender, write31days