An Unbelievable Peace: Three Generations Being Made Whole. (Day 13) 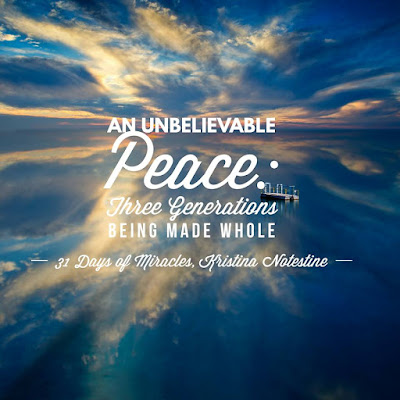 This is the thirteenth post for our Write 31 Days series 31 Days of Miracles: Who is Our God. Today, Kristina Notestine shares her Grandma's story. 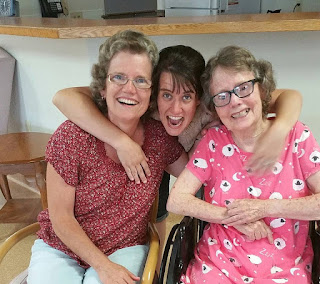 My grandma has always been such an inspiration to me. God gave me the grandma that I have to show that through God our lives can dramatically change forever. Life for grandma has never been easy. There has been constant dysfunction and pain in every aspect of her life. But grandma keeps pressing on. Her constant leaning on God and always dwelling in His word wasn't always like that for her.

At a tender age of two, my grandma's dad died. A few years later her mom remarried his brother. It ended up being a horribly, emotionally, damaging relationship built upon his alcoholism and abusiveness towards her. I can only imagine that pain and confusion that she had growing up with that relationship. She moves out and gets married to my grandpa. Together they started a family as they traveled around place to place because grandpa joined the Air Force. Grandma continued to hold onto the hurt and anxiety from her childhood which made her leave her family three times in a 7 year period. My mom said that the first time grandma left was unexpected and no one knew where she went. The last two times she committed herself into a mental hospital after having a nervous breakdown. At that last time, she stated that she wanted a divorce. Both my mom and aunt told me how they both withdrew from the family unit during that time. It was so hard to deal with avoiding it seemed to be the best thing. As my mom put it, as soon as she graduated, she moved out immediately to go live with my dad. That summer grandma and grandpa got back together. But life just went on as much as it could until a year and a half after coming home from mental hospital through the relationship of my aunt's friend and friend's mom, my grandma became a Christian. 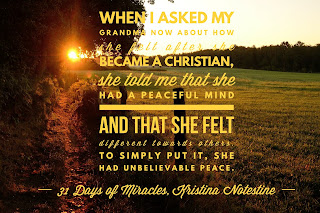 When I asked my grandma now about how she felt after she became a Christian, she told me that she had a peaceful mind and that she felt different towards others. To simply put it, she had unbelievable peace. When she become a Christian, she clearly heard that Holy Spirit tell her that grandpa and my aunt were going to become Christians in her life. To this day this is something that she has held onto and will continue to hold onto until she dies. This simple statement of faith and what I have seen has always impacted my life. And it was only because God got ahold of her and gave her unbelievable peace.

Becoming a Christian and having this unbelievable peace was the only thing that changed in her life. My grandpa now was retired from the military and began to take up drinking on a daily basis. He was this man that had a rough exterior but as you got to know him, he did have a soft side. But the drinking brought out the worse of him. When we confronted her with our frustrations, her response always was, "It is only by God's grace." We witnessed often that unconditional love that she showed to him. She practiced this constantly by drawing near to God through His word from her huge stack of verses cards and getting involved in church.

After she became a Christian, grandma constantly told her love ones that she was praying for them. Mom said she just blew her off. But through grandma's praying and God's intervention when I was 2 years old, both of my parents became Christians. I too also became a Christian when I was 7. Our generational shift was already happening. 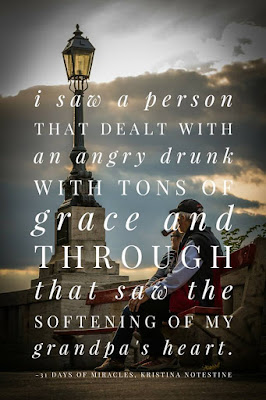 When my dad retired from the military in 2000, we moved back to where all the grandparents were. This is where I really got to know grandma and life as she lived it. I saw a person that dealt with an angry drunk with tons of grace and through that saw the softening of my grandpa's heart.

Since 2000, my family and I got to see the slow transformation of grandpa from completely not wanting to talk about God to being completely open to talk about God anytime with anyone. He would always joke around that he couldn't enter a church building without it caving in. But near the end of his time here on earth, he would come and pick up grandma up and actually sit down during fellowship time and talk to people who came to talk to him. God was most certainly working but He was using heavily my grandma in his life. This interaction with my grandfather has always made an huge impact in my life and the way I treat my husband who also struggles with the things of God. Her absolute faith that God told her that grandpa was going to become a Christian motivates and moves me to pray and live the same way.

This past December my grandpa died of a weak heart because of all the stress of taking care of my grandma who now suffers with a form of dementia. It happened during the night. He got out of bed stating that he had chest pains before falling on the floor. My grandma and uncle called the ambulance where they stabilized his heart until they got to the hospital. And then he had another heart attack and died.

Because of my grandma's faith, I believe that my grandpa accepted Jesus as his Savior. None of us can judge or think it is nonsense because anything is possible with God. Just seeing him soften throughout the years constantly seeing and hearing the gospel, I don't know when he did believe but when my grandma dies, she is going to see him in heaven. 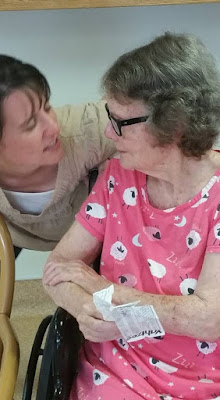 After grandpa died, my grandma now lives in a nursing home. Yes, she is sad but if you talk to anyone there or who knows her, my grandma is still very much in peace. She always takes the advantage of any opportunity to tell someone about God. Since she can't see well and can't get around without an wheelchair, all she does is sit in her chair listening to hymns and to someone reading the Bible on C.D.

Through my grandma's example, I can hold onto the fact that God can graciously change my life dramatically. He does that when I hold onto the promises and commands in His word just like grandma does. He does it through constant reliance on Him. He does it when I can recognize my need for Him. I am so thankful for my grandma and all that she has taught me by word and by her actions. 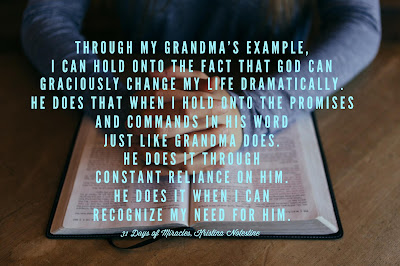 Posted by dbmichael at 9:10 AM