An Overflow of Joy and Delight: 31 Days of Miracles, Day 8

This is the eighth post for our Write 31 Days series 31 Days of Miracles: Who is Our God. Today, Lesley (see below for her bio) shares her story.
I had grown up hearing about God’s love. I knew how the song went: “Jesus loves me, this I know, for the Bible tells me so,” and I believed it, at least in theory.
I struggled to feel it though, and it didn’t seem to make any difference to my life, but I was taught that feelings were subjective and unreliable. They didn’t really matter- what was important was trusting what the Bible said- so I kept going: trying to do all the right things, trying to ignore the lack of feelings, trying to push down any sense of desire or expectation of anything more.
After being in full time youth ministry for two months, I attended a conference. It had been a hard two months. There had been many challenges and I felt weary and extremely inadequate in many ways, but the conference had been encouraging, until suddenly, during the last session, I was plunged into despair.
I can’t remember exactly what was said, but I remember the fear that overwhelmed me- fear that maybe I wasn’t really a Christian . . . maybe God had rejected me . . . maybe all this was for everyone else and not for me. 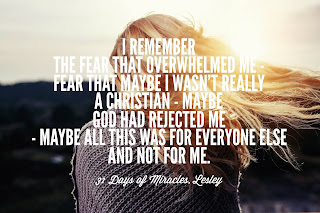 As soon as the session ended I retreated to the toilets. I didn’t know what to do. I felt alone, abandoned, unwanted by God. I felt that my faith was collapsing around me, and I realised that, if that was the case, I didn’t belong there.
I had no idea how to move on from this and so I sat there, desperately praying that God would help me, that he would somehow show me what to do, or at least let me know that he was there and that he cared.
No answer came.
Eventually I gave up and decided to go back upstairs. Nothing had changed, but I realised I couldn’t stay in a toilet cubicle for the rest of my life.
Fortunately a friend found me. She said later that I was pale and shaking, and that I looked awful. I was far beyond the point of being able to pretend I was okay, so we talked for a bit and she asked if she could pray.
I hesitated- I was terrified that nothing would happen and my worst fears would be confirmed- but eventually I agreed.
She started to pray, asking the Holy Spirit to fill me, and straight away everything changed. It’s hard to put into words, but it felt like a warm, soothing liquid was filling me up, and with it came a sense of love, joy and peace that I had never felt before. As I thought about God’s love I could feel a sense of joy and delight passing through my whole body. It was as if what I knew of God had gone from my head to my heart, and I finally felt and experienced it and knew that it really was for me. 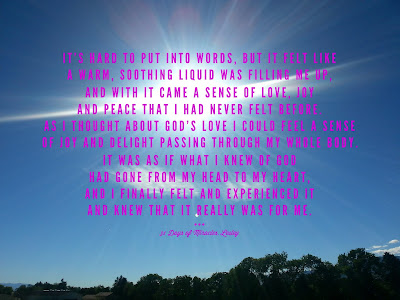 It was such a sudden and dramatic contrast from how I had been feeling only moments before. Heading to the train station that afternoon, I couldn’t focus at all on the conversation, only on the worship music playing on the car CD player. As I sat in the station I suddenly realised that I was singing out loud, praising God! Not very loud, but loud enough to be noticed. This was not normal behaviour for me at all, but even as I tried to stop myself it was hard to contain!
Over the next few days, several people noticed something different as soon as they saw me or spoke to me, and I experienced an unexpected breakthrough in a situation that had seemed hopeless.
Of course I couldn’t stay on this spiritual high forever, and the sense of giddiness gradually faded, but something had changed forever that day. The sense of God’s love remained and it made a real and lasting difference in my life.

Over the next few years there was some difficult processing of past events to be done, and this experience helped to sustain me during that stormy time and anchored me in the reality of God’s love. 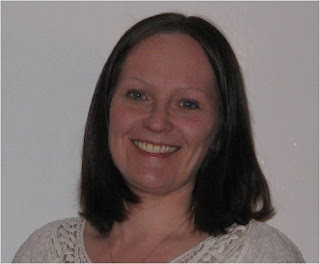 Lesley lives in Scotland and works as a youth worker with a Christian charity. She enjoys music, reading and going to the theatre, and she has been blogging for just over a year at it Life In The Spacious Place. You can also connect with her on Facebook or Twitter.

Email ThisBlogThis!Share to TwitterShare to FacebookShare to Pinterest
Labels: 31 days of Miracles, An overflow of joy and Deight, Life In The Spacious Place, miracles, write31days