Hope in the Darkness (Day 10 of Miracles) 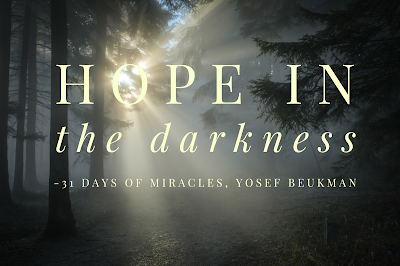 This is the tenth post for our Write 31 Days series 31 Days of Miracles: Who is Our God. Today, Yosef Beukman (see below for his bio) shares his story.
I grew up in a Christian family, which most would have called normal. From the outside we looked like a great family but inwardly we struggled with different issues. My Father was a Children’s church Pastor in a well-known mega church in South Africa and as such, most of his time was spent away from home at conferences or teaching other people’s children. Over time I developed a need in my life that most young children do, a need for a fathers love and tender care, a need for a father’s touch. 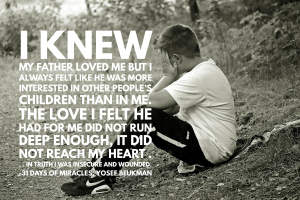 I knew my father loved me but I always felt like he was more interested in other people’s children than in me. The love I felt he had for me did not run deep enough, it did not reach my heart. It did not comfort me with safety, it did not help me find my identity as a man, in truth I was insecure and wounded. It was because of this insecurity in myself and the fact that my father was always busy with church things, that I found myself feeling neglected and frustrated inside. 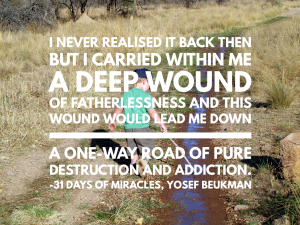 I chose to hide it and bottle it up inside of me but as I got older the frustration turned into outright rebellion. I wasn’t naughty or rebellious, until I turned 18, I just didn’t want to be like my father was and I definitely didn’t want to serve God. I never realised it back then but I carried within me a deep wound of fatherlessness and this wound would lead me down a one-way road of pure destruction and addiction.

It didn’t take long until I did my utmost to get out the house and find a job in the real world, where I could be away from my family. I started working in retail and was introduced to the world in a way that I had never experienced before. People, friends and partying became the norm, everybody lived this life and it seemed carefree so I joined it. I would spend days away from home just so that I didn’t have to be there. My internal issues were causing me to look for happiness in other ways, in destructive relationships and habits. One thing I always struggled with was disappointments and after a particularly bad week, a friend from work invited me to a club. It was a night that changed my life forever. I remember just wanting to have a good time and forget all the negative emotions I held inside, along with all the things that were spinning out of control around me. I never knew that the friend I went to the club with, was a drug user. I always thought that something was up with him, but never I never knew that he was a user. I remember him coming up to me, speaking to me and saying how I should try taking an ecstasy tablet.
He promised that it would take my problems away, he told me it would make me happy. At the time I really didn’t think any further than the moment. Who does? When you down, depressed and frustrated, do you ever really think of the consequences of your actions? All I remember is taking that pill and thinking that I wanted it to last forever. All my worries were gone for the moment or so I thought.

That one pill turned my life upside down and caused me to lose everything. When I mean everything I mean everything. To the point that I became a heroin user. My addiction got so bad that I landed up in Jail for housebreaking. I thought I could control my addiction yet it began to control me. From the first pill till the last injection, I wasted years, many years. My emotions changed, my outward appearance changed. I lost everything, from self-respect to friendships and I almost lost my family.
In all those years I went from uppers to downers and everything in between until I finally got hooked on heroin. I started off smoking it, telling myself that I would never inject it in to my veins but that was a lie, it didn’t take long until I stuck a needle in to my arm. From being a successful sales man I became a homeless beggar on the streets, wondering around begging for money to get my next fix. I lost so much weight that I resembled a mere shadow of the man I once was. I had run away from up North and made my life on the streets, along with the other homeless drug addicts. I know what living on the street is all about, I know why people are there. I lived in a burnt down house for a year, with other users. As night we would lie down and sleep beneath the blankets people handed out to us. I ate from the soup kitchens and knew where to go to get a meal. Many people reached out to me but I did not change. I was arrested a few times for shoplifting and spent days in and out of prison. Prison in South Africa is a whole different world, it’s a nightmare, a hell, something that destroys the strongest of men.

In all this time the grace of God was what kept me from dying. The loving prayers of my family was what kept me alive. They never stopped praying for me while I was a shadow on the streets, even when they thought I was dead. My parents did not know if I was alive or not, I had run away and they were out of the country doing mission work. We had lost contact, my sister got married and I was not there, my family thought they had lost a son but God gave them hope in the darkness.

One day while living on the streets, I was waiting in line at a soup kitchen run by Rastafarians. A wealthy lady who helped at the soup kitchen, suddenly approached me, and told me about Jesus.
I said “I know all there is to know about Him, there is nothing He can do for me now.”
I will never forget the love that radiated from this person and how they told me that if I don’t get help I would die.

They told me about a place of hope where I could go and get help. It took a lot of courage to get myself there and to deal with my problems. Yet in all this God had a great plan of redemption. He had his hand ready to take me in and to love me, despite all the wrong choices I had made.

COME BACK tomorrow to hear more of Yosef’s story and of stunning miracles that have enabled him and his wife Aliyah to serve powerfully to the glory of the Kingdom of God.

Continue Yosef's story with Day 11, Nothing, Absolutely Nothing, Can Separate You from His Love.

Josef Beukman
His life once buried beneath a blanket of hurt and drug addiction, Yosef was powerfully set free by the God of the Universe, a God whose word He a has a passion to proclaim. He is an ordained minister and in full time ministry where He teaches, preaches and has found his passion for video production and editing. He makes his home in South Africa and teaches over at www.treasuredinheritanceministry.com.
Posted by dbmichael at 5:15 PM