He Simply Loves You: 31 Days of Miracles, Day 9

This is our ninth post for our Write 31 Days series 31 Days of Miracles: Who is our God. Today Jamie S. Harper shares her story. (See her bio below) 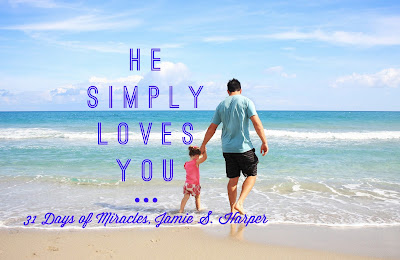 Usually when I think of miracle, I think of supernatural healing. To my knowledge, I’ve not experienced such a miracle. I have experienced the miracle of God’s manifest and hidden presence.
I grew up going to church with my parents. I asked Jesus into my heart several times, but I was not baptized until I was 18. Baptism for me opened up a new experience. God became alive and active in my life. When I went to college, I wanted to experience community and not go astray, so I joined a campus ministry. While there, God called me to missions so I went on two summer mission trips.

The first summer, I went to Youngstown, New York. God was so present and tangible to me those weeks and months that I was there. He spoke to me in a way that felt audible even if it was not. Often times, I was aware of His spirit moving in others, even one time knowing that one of the youth was accepting Christ as Savior during one of our special events. God was my very best friend. This closeness with God continued as I traveled to Oregon the following summer. He manifested His presence to me.

This sweet time of closeness started changing when I was getting ready to graduate college. I considered going to Los Angeles and applied for jobs all over the country, but no jobs opened up. I moved home, and was met with a quarter life crisis. This led to a dark night of the soul. My parents were considering divorce; a boy had broken my heart; I was having trouble finding direction; my best friend moved away; and I could not hear God. He was silent, and for a long time, I thought I’d been abandoned or that I’d done something wrong. It seemed everything had been taken from me, and I blamed God.

That was a vital time in my faith. There were whole chunks of time where I did not know if God was for me. The miracle in those times was hidden. God’s presence had been manifest and obvious, and then it was hidden. However, God was doing some of His best work in me in the times when it was not obvious. 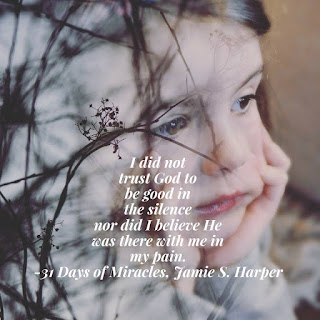 Had I not experienced the silence of God, I would not have known the depth of God. During the silent times, He was breaking me free from the addiction of people pleasing, codependency, self-righteousness, and false beliefs about Him. I did not know that I didn’t really know that God was good. Of course, He was good. I’d experienced Him, but when He was silent, I realized that I thought my way was better than God’s. I read the bible, knew it pretty well, but the relationship and belief of it had yet to root deeply into my heart. I did not trust God to be good in the silence nor did I believe He was there with me in my pain. When I was little, my mom told me that God’s judgment could come down at any moment, and this fear had enslaved me.

Underlying it all, I thought I had to be good to get God’s attention. Surely, this is why I felt abandoned. The codependency in my life had set me up to manipulate the Creator, and the only way to break the chains of manipulation was for God to show me that He was God period. I think that’s why this process was so long and painful. Though a sensitive soul, I am also a tough nut to crack. 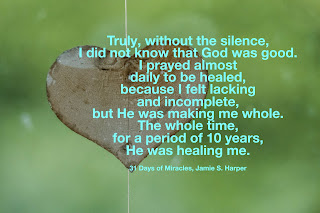 I was not my best in the silent times. I felt alone, angry, and I floundered and sinned. I thought God had stopped loving me. I did not know to replace my insecure thoughts with God’s thoughts. Truly, without the silence, I did not know that God was good. I prayed almost daily to be healed, because I felt lacking and incomplete, but He was making me whole. The whole time, for a period of 10 years, He was healing me.

Slowly, I moved out of the dark night of the soul. This was my foggy time. I stopped believing God wanted to use me for His purposes, but I knew I was nothing without God and I needed Him. During those 10 cloudy years, I married. I had three children. I kept going to church, and sometimes, I led bible studies. Looking back, I’m not sure I had any business doing so, but then again, I think God is so gracious. He can use people and things that have no idea they are serving Him, and those very studies helped set me free. 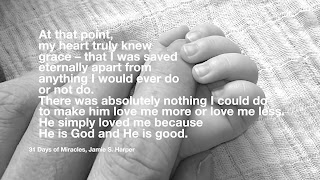 It was at this point that I knew that even though my head had longed believed that I was saved apart from good works, my heart finally did. All those years, I did not understand that I was enslaved to my own good works. At that point, my heart truly knew grace – that I was saved eternally apart from anything I would ever do or not do. There was absolutely nothing I could do to make him love me more or love me less. He simply loved me because He is God and He is good. Neither of which I was. Looking back, the silence of God taught me the depths of His goodness and love.


I knew that I was profoundly loved, that the silence was not just because of my sin, that chains I didn’t previously know held me down had been removed.

Physically, I looked the same, but a soul miracle occurred.

Now I am in another season of less obviousness of God, but I am eternally changed. That period of manifest grace will not let me be enslaved to good works any more. Nor am I afraid of not being enough for God (well I think He’s still working on me in this), but I have received the depths of His love. Instead, I am moved to good works not because I might be judged but because He is good. Each time He shows Himself and then hides and then shows Himself again, I know Him more. And all I want to do is give to everyone I meet the depths of His goodness and love that He’s lavished on me. 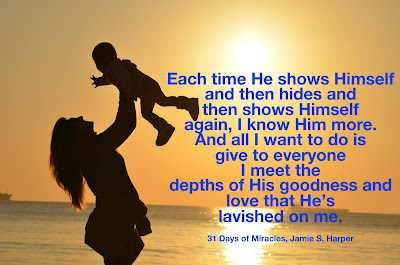 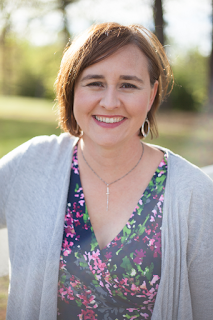 Jamie S. Harper spent much of her life as a good girl and people pleaser. She walked through a valley of darkness, wondering if God had deserted her. Instead she found Him near. Grace dug her out of her own people pleasing pit to be deeply rooted in His Love. She blogs at www.jamiesampieriharper.com.
Posted by dbmichael at 9:58 AM