We knew nothing of Bobby until the hospital gave us a piece of paper with a name and phone number handwritten on it. I didn't recognize the name. I suppose my questioning look prompted the nurse to add, "He said he was your son's boss."

Bobby had called the hospital so many times to ask for Roma's condition, they had to ask him not to call anymore. They promised to give us his number and we   could contact him. The last time Bobby had seen him, Roma was unconscious but breathing on his own.

When we called the number of the stranger on the morning of December 7, we introduced ourselves. I could hear hope in Bobby's strained voice, "How's Roma?"

Bruce paused just a moment, as though he needed to shield this man we had yet to meet from the devastating truth. "Roma didn't make it."

"Oh my God, Oh God" Bobby's voice trailed off into broken sobs. He continued, though periodic primal groans, "We were finished with that job. . . I was already down my ladder. Roma was getting ready to come down. We were done. . . Oh my God . . . I don't know what made him lift his pole so high and hit those wires. They were ten or fifteen feet above the roof. . .  I was on the ground waiting and I heard a loud pop. I looked up and Roma was coming down. Oh my God. Oh my God." Sobs overtook him again.

I was processing his words. Roma had lifted his extension painting pole high and hit a live wire. It made no sense to Bobby. It did to me.

Roma had many wonderful qualities, but patience was not on the list. How often I had seen the dramatic display from the exasperated boy: Roma's head would drop back and his eyes close in a theatrical display of relief, emphatically uttering the words, "Thank the Lord, that's over,"  regarding some tedious task he was relieved to have completed. The emphasis was NOT on thanking the Lord! No, it was on the completion part. Roma grew up in church and with me, so thanking-the-Lord language was part of Roma's language. He learned it as he learned English. By hearing.

This job had lasted weeks. I had driven him to this work site in downtown Frederick, Maryland,  as had Bruce. Originally Roma had said they were going to make a lot of money on this job he predicted would last only a few days.  Bobby's words reminded me of Roma's eagerness to be done with it. And he finally was that Sunday afternoon.

Now I had a clear picture of what happened. At the long awaited and overdue moment of completion of that painted metal roof,  that job that had annoyed him for two weeks too long, Roma lifted his extension pole in a final flourish of "Thank the Lord" triumph. "It is finished!"

And, just like that, it was over. Roma's beautiful life was done. The live wire knocked him out, and he fell, unconscious, to the sidewalk below. It was finished. He had no fear. No pain. The lights just went out.

I believe it happened this way. It gave me peace to know he didn't know he was falling away from the second floor roof, so he felt no fear, and no pain when he hit the sidewalk, head first. God had pulled the vital, real Roma away from the scene, as a lifeless body fell.

Bobby called two more times that afternoon, crying. I tried to comfort him. He apologized, "I'm so sorry. I'm so sorry. I really loved that kid." I tried the best I could to sooth this man I'd never met. This man who had the memory of my son's last moments of life and the horror of the graphic accident forever burned into his memory.

The next afternoon, Bobby called again. "I've been seeing wires and ladders all day. I'm really shaken up." I wanted to remind Bobby I was really shaken up too, but he added, "When I turned onto Wisconsin Avenue, right in front of me, a wire sparked with a big ball of light and a loud pop, almost like an explosion. It scared the hell out of me. Right in front of me." Then he continued to tell me how sorry he was, and he didn't know if he could continue to work.  And he really loved my kid. I was still thinking of the wire lighting up in front of him.

"Bobby, did the explosion of light comfort you at all?"

"Did you ever think it might have been Roma saying, 'Hey Buddy, I'm okay. Don't beat yourself up. It wasn't your fault."

"No," he paused, "but maybe it was Roma," he said without emotion.  But the thought sent Bobby into another round of sobs. "God, I really loved that kid. I'm so sorry."

I pushed the point I was desparate to believe. "Maybe it was Roma. Maybe he was saying 'Hey man, don't torture yourself. I'm okay. I'm better than okay.'" I felt such compassion for this man who seen my boy die. "Bobby, it wasn't your fault."

Bobby's eyewitness account of the events of the afternoon reinforced what I had come to believe. That God had taken Roma because it was Roma's time to go. His work here was complete. God had warned me. He had lovingly and mercifully prepared me to let His boy go Home.

I kept thinking of Taylor's wise words. Taylor was about to turn 13 when Roma burst into Taylor's quiet, calm world. (And "burst" pretty well describes Roma's activities!) Just days after Roma came, Taylor recognized that Roma was not the little brother he was expecting to live at our house. Brave Taylor said, that until he could think of Roma as a brother, he would consider him an exchange student from God. That image changed forever the way I would look at my new son.

Taylor's description comforted me. An exchange student comes from afar. Then he returns. He does not stay. Roma had been Called Home. His time with us was complete.

After more contemplation, I understand that Roma hadn't really come as an exchange student. No, his role had not been as a student at all. Roma had come as a teacher. Oh, what that boy taught me. And in the six months since he returned to God, I look around and see he taught so many more people than I could have imagined. Even people who never knew him. And Roma continues to teach us. One of his friends just told me the other day that Roma was a "once-in-a-life-time kid." So he was. Oh, how God loves Roma. And how He loves me, to have picked me to "host" him for fourteen years!

Roma came to us as a smiley, exuberant, beautiful seven year old, ready to take on anything. The child feared nothing. And surprisingly, he knew everything! He visited for a joy-filled and exciting, and sometimes challenging fourteen years. He returned to God at twenty-one, after we were all better people for knowing him.

He had been home for seven weeks to the day.

When we arrived at Shock Trauma, Roma was in room seven.

When we returned the next morning, Roma had been moved to another floor. He was, again, in room seven.

He used number seven in his email address and in his passwords.

He wore number seven on more than one sports jersey.


He was pronouced dead the morning after the accident, on December 7, at 7:16.

And seven is the  Biblical number of completion and perfection.

Thank the Lord. It is finished. 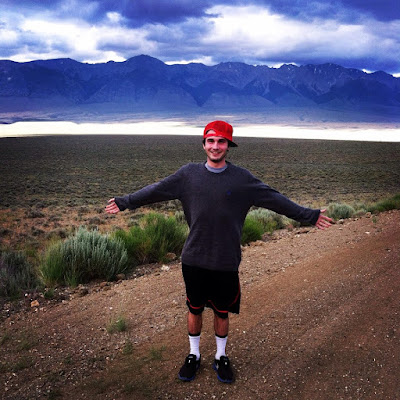 Posted by dbmichael at 1:04 PM

Email ThisBlogThis!Share to TwitterShare to FacebookShare to Pinterest
Labels: But the greatest of these is love, Roma