"Consider it all Joy when you face trials of many kinds, because you know the testing of your faith produces perseverance. Let perseverance finish its work so that you may be mature and complete, not lacking anything." James 1:2-4

The past couple years have been a season of trials. I am learning perseverance. By most standards, "JOY" should not be the first word to describe these experiences, and yet I have experienced remarkable JOY! One important lesson I have learned — Joy is not the absence of suffering, but the Presence of the Most High God. In this period of testing and, yes, even suffering, God's powerful presence has sustained me and brought me to a new level of faith. I am grateful.

One reader recently messaged me after reading the Hound of Heaven Winks series of posts, "It's stories like these that make me say 'how do people say God doesn't exist?'" So, if my shared stories help people "see" God, I will keep sharing them.

Storytelling. Sharing our testimony. I have been given more than my share of "interesting" material for powerful storytelling! And even instructed, in a dream, to "write all this down." I strive to be obedient to that command.

My ways are not God's ways, nor my thoughts His thoughts, so I am so thankful that Jesus told stories for illustration, instruction, and illumination. I am grateful that he shared The Parable of the Prodigal Son.


In The Parable of the Prodigal Son, found in Luke 15:11-32, the earthly father does not go after the spoiled, ungrateful son. Unceremoniously, he lets him go. No wringing hands or anxious pleading. No angry threats, no condemnation, or recrimination.

I have a wise friend, Dave, who always taps his forehead enthusiastically when I share my prodigal stories. "Their brains are not fully functioning. The frontal cortex is not completely grown until they are in their mid twenties," Dave offers an explanation to which I eagerly cling!

And there are new studies revealing evidence of Dave's assertion.

I have no power to speed the clock. I have no control. I do have power to influence as the clock ticks, but I must be careful how I deliver that precious and powerful tool of influence. It has to be wrapped in unconditional love.

Until that frontal cortex is mysteriously set, (and I suspect I'll recognize some signs)  I often imagine I am talking to a blob of gray clay as I communicate with the young people in my life. Great potential exists in gray matter, as in gray clay. I'm sure it is no accident that God is often called the Potter, and we, the clay.

As a sculptor myself, I must resist the urge to grab that potential masterpiece sprawled before me and slam it on the table, as I might a real blob of clay (I assure the reader this is a genuine technique called "wedging" and has a purpose!) Sculpting, as "influence," is tedious and delicate work requiring patience. I must be reminded of this. Daily. Hourly.

Now, back to Jesus' powerful parable. . .

The father, knowing he had no power to control his self-centered son, lets him go. And in verse 17, (a verse I must have overlooked in previous readings) Jesus said, "Then he (the son) came to his senses."  Hmm . . .  (The frontal cortex element?) God created and understands the workings of these complex organs. The "inevitability" of this step rings true to me. It is part of the process! For all involved. It is in the process that we are transformed! The father didn't say goodbye and then forget about his son. Or even lose hope that he will return. The father never stopped scanning the distant landscape for the boy he prayed would appear on the horizon. Verse 20b reads, "While he was still far away, the father saw him."

About a year a half years ago, I had a sudden premonition of impending suffering. I have never been prone to depression, so this dark cloud came as a surprise to me. Every perseverance-building incident that has happened during that time, I ask God, "Is this it?, is this what You've warned me about?" hoping that this not-so-horrible experience might be why God issued His warning. I am thankful for His "heads up." He knew these challenges would come, and He is merciful and loving enough to warn me about it, instead of allowing me to be blind-sided. And He has promised to never leave me. That comfort transcends any pain.

That recurring feeling of coming trials also came with a "Prodigal Son" Sacred Echo, leading me to to seek wisdom in all things "prodigal." Prodigal is defined as an adjective meaning "carelessly and foolishly spending money, time, etc."  Another surprising definition is "yielding abundantly." Tim Keller used this definition in his best seller, The Prodigal God.

Another important book heightened my perspective, The Return of the Prodigal Son, by Henri Nouwen. Maybe since I am an artist, I related to Priest and author Nouwen's chance encounter with a wall poster of the famous Rembrandt painting by the same name. Nouwen was struck by the hands of the father. His was a powerful spiritual journey. Aren't they all? 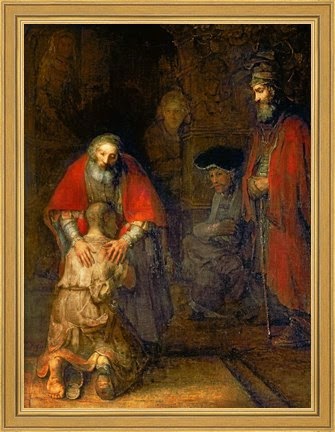 Neuwen recognized his own role as all the players in the drama. First, as the younger son, he searches where "It" cannot be found. Then, as the arrogant older brother, he has been judgmental, vengeful, and unforgiving. And finally as the father, Neuwen knows he must be the welcoming, forgiving, loving father.

I like to think I was never the "younger brother" in this story. Being an introvert who is averse to conflict and a "rule follower," I never left home to satisfy a wild temperament. Then there are those less prideful moments when I recognize those little signs that I had, indeed, "left Home."  I also confess that I have suffered from the arrogant attitude of the older brother who was resentful of the return to glory of an undeserving "brother." I have also fallen short when I was called to be the spiritually mature "father" who didn't hold grudges, who forgave, and who loved unconditionally.

I pray that my eyes be open to my own wretched shortcomings in this unfolding drama, this remarkable journey, remembering that our Gracious God redeems all of it.

The next post will shift into another surprising God story. I am so happy to share the first part of the Family Connection series, Hope for Restoration. A must read.