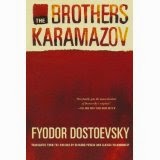 I read The Brother's Karamazov by Fyodor Dostoevsky a couple of years ago. A 800 page, 19th century Russian epic novel is not usually my cup of tea, but when the title kept coming up on lists of must-reads for Christians, I was curious.

The staggering number of characters and plots is dizzying. Between the three brothers alone, Dmitri, Ivan, and Alexei/Alyosha, they have a whopping 14 nicknames. Then there is the other brother, Smerdyakav, the illegitimate one. Paragraphs can run on for eight pages! It is not an easy read. I found myself flipping back to remember who was who, and wishing some capable contemporary author would take on the daunting task of updating the behemoth, tidying the subplots, quickening the pace, getting to the point already, modernizing the paperweight!  But I slogged through! In the months that it has taken me to process the book, the reward has come.

More than a few have called The Brothers the greatest novel ever written. Read some excellent reviews here. The book has power. Soviet dissidents in the Soviet Union in the 1970's gave much credit to Dostoevsky and his contemporary, Leo Tolstoy, for their spiritual curiosity in an age of atheistic philosophy in the USSR.

One reviewer on Goodreads writes, "It's hard not to wish that one had such bizarre events going on around one in order to prompt such lofty oratory." His words reminded me of my own remarkable events this summer, summarized in my posts starting with The Hound of Heaven Winks. With the heart highs and lows of the continuing story of my own "Dmitri," it is surprising that JOY is the overarching emotion. Joy is not the absence of suffering but the mighty Presence of God! God continues to show up!

Although the two authors never met, Tolstoy was critical of the younger Dostoevsky, perhaps jealous, but was rumored to have kept a copy of The Brothers on his bedside table. Before you rush out and buy it, I'll warn you, it isn't for everyone. I repeat, It is not an easy read! It has been called a murder mystery, but the mystery is solved a few chapters in. Dmitri, the eldest is accused of his father's murder. He is arrogant, but not unlikable. Then there is cold, intellectual Ivan. The youngest brother, Alexei/ Alyosha is called the hero at the beginning of the story by the narrator, but he doesn't seem to do anything heroic, by the world's standards.   And mysterious Smerdyakav. Four brothers from a rich and despicable father, Fyodor Karamazov. The book was actually intended to be the first of a trilogy. The next installment was to follow the brothers to America. But Dostoevski died four months after The Brothers was published.

The sheer mass of this book had been almost prohibitive for me, and being a slow reader, I felt like I could have lived the story as fast as it took me to read it. And that was one of the  points. As one night in the story symbolically turns into morning, the message of the book dawned on me. The characters changed not nearly as fast as I would have liked. So too, in life. The change came slow and with some emotional sting involved. I continue to think about the characters. And not until I looked back on the story does it continue to change me. I want to be like Alyosha. I strive to be like Alyosha. He is the hero.

"Life is a journey" has become a cliche. But the Power of the Universe keeps nudging us back to the High Road of this journey. We wander off, He comes after us. It is a Supernatural experience. Pay attention and experience the JOY of the journey.

If you can get through The Brother's Karamazov, it just might change your life.