This is my son

It has been a year and two weeks since Roma left for Heaven. In that time I have shared many experiences that God has used to comfort me. I have began many new posts that I have not completed. But I am moving ahead, considering all I have shared, I believe it might be time to start that new book that has been revealing itself over the past decade. My first book, But the Greatest of These is Love concluded in 2003, at the year anniversary of Roma's arrival. My editor added "The end and the beginning" at the close of the book. I could not comprehend that the story was truly just beginning. And it hasn't come to on end yet.

In a effort to bridge that gap from 2003 to 2012 when the book went to the publisher, I shared one story from 2009 at the end that would be a glimpse into our lives over the years, and summed up Roma's personality. It is the story that follows. I hope readers will read But the Greatest of These is Love and the blog posts that followed over the years. I was even instructed in a dream to write it all down. The documented experiences are priceless to me now, and protected against the effects of my fading memory. I am thankful to God for unmistakably telling me to write it all down, and then giving me the words.

A logical beginning blog post is The Hound of Heaven Winks, when God made me hyper-aware of His presence. The links at the bottom of each will advance the reader to the next post, and cumulatively will serve as my abridged memoir. The unabridged story, I will be working on. Blog posts by definition are short and designed for quick reading. My next effort will be to tell the whole story as I know it, as it has been given to me, as I have lived it, and how I understand it.

In spite of the grief of losing Roma this side of heaven, I am comforted by the knowledge that he is not gone forever. He just went ahead of me. So like Roma to have to be first.

This is the ending of my first book. Enjoy, and be inspired to read the whole book and prepare for the second book. All profits have always gone to orphan care.

This is My Son

When I heard his bedroom door slam with force, I stomped to my own room and resisted the urge to do the same. I reminded myself that I was the adult.

As usual, I didn’t see this skirmish coming. It started benignly, with me reminding my fifteen-year-old of his responsibilities.

As usual, Roma replied absently, “I’ll do it later,” while watching TV.

“Roma, if I had wanted it done later, I would have asked later.” I chose my words and tone deliberately, to sound calm, reasonable, and in charge. “You are done with TV for now. When you have straightened up your room, you can go out and help Dad shovel snow.”

“What?” Roma barked at me, his green eyes bulging with hostility. “There is too much snow to shovel! It is like ten feet deep.” Roma’s hyperbole is legendary. 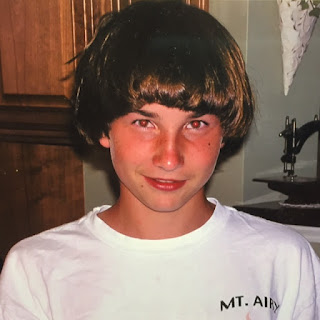 “Roma, I am not arguing with you. If you have any hope to watch TV later, you need to do your chores, now.”

My early resolve to remain calm soon failed, and we ended in full blown verbal combat.

Adolescence has been difficult for Roma. We all suffer when he fights for control. He can be defiant, argumentative, and manipulative when he demands to have his way. When he is less determined to be the boss, he reverts to the little boy I remember who is delightfully witty and charming, with a sweet spirit and a generous heart.

Bruce and I adopted Roma from Russia when he was seven and three-quarters—old enough for a strong personality to set. Until God plucked him from the orphanage for our family, he was pretty much in control of his young life. It has been hard for him to hand the reins to us.

When I felt God’s not-so-subtle call to adopt an older Russian child, I expected a shy, hurt little boy in need of gentle encouragement and acceptance. What God sent us was an assertive, confident little dictator! And God had a bigger surprise for me: I could love an adopted child every bit as much as I love my other three children. Little Roma was so cute and smiley, our older soft-hearted children often let him have his way. I was determined not to spoil him, especially when our son Taylor, twelve at the time of Roma’s adoption, said that until he could think of him as a brother, he was going to consider Roma an “exchange student from God.” Rearing a boy sent from God was a responsibility not to be taken lightly.

A determined mom and a headstrong boy often butt heads. This, like most of our battles, was a power struggle over who gets to be the boss. Once in my room, I fell to my knees and prayed through clinched teeth, “Lord, you sent him to us; pleeease help me deal with him. Please teach me patience and wisdom to mother Roma. And Lord, please give me hope that, in the long run, he will be okay.”
I phoned a close friend that evening who I knew could provide hope. Her sons, age twenty-six and twenty-seven had challenged her similarly in their younger years, but were beginning to show signs of genuine maturity.

“This is so hard,” I confessed. “I am praying that I keep my sanity, what little is left! But I am mostly praying that Roma will grow up to be a functioning member of society.”

My compassionate and wise friend assured me that Roma would not always be fifteen. I ached at the thought that we might suffer another ten years before relief, but hope was hope, and I knew God’s timing wasn’t my timing; otherwise, Roma would be acting like an adult by now!

The next morning, I remembered a dream from the night before … Was it a dream? Bruce and I were talking to Roma outside in intense sunlight. Roma was like a dazzling white statue, yet he was moving and talking like normal. I had to squint to look at him. His essence was bathed in a white, unearthly brilliance. Bruce and I were talking about the bright light but were somehow not amazed by it.

The dream was so vivid; it lingered with me throughout the day. I even asked Bruce, during a break from his and Roma’s marathon snow shoveling, if we had indeed talked to Roma outside the day before, and had he been so bright we could hardly look at him? It almost seemed plausible because a record snowfall had begun days earlier. In the surreal time that we were trapped at home after the blizzard that week, our suburban neighborhood had been transformed into a winter wonderland. Everything was buried under four feet of snow after “once-in-a-hundred-years,” back-to-back blizzards. When the sun reappeared, the whiteness of all that snow was truly blinding. Sunglasses were as essential as snow shovels. Despite the outside brilliance, Bruce’s blank expression told me that no such thing as a conversation with a glowing white Roma had taken place.

That evening, having forgotten about my dream, I was catching up on my Bible reading. I began where I had left off, at Matthew, chapter seventeen, the Transfiguration. “His face shone like the sun, and his clothes became as white as the light … and a voice from the cloud said, ‘This is my Son, whom I love; with him I am well pleased.’” (NIV)

Hairs stood up on my neck and chills raced down my arms.

Now don’t get me wrong—I don’t think for a moment that Roma is Jesus returning! But in the same way that we are all God’s children, Roma is one of God’s boys.
I had prayed for hope. Empowered with divine encouragement, I have lightened up with Roma and try to cut him some slack when he behaves like the adolescent that he is. It is his job as a teenager to test me at every turn, and he takes his business very seriously! Many of his strong-willed leadership “skills” will be assets to him when he grows into them. We need to be on the same team instead of on opposite sides at tug of war.

God is in control of Roma. Jesus was about thirty when he came into his ministry, not fifteen! The only knowledge we have of Jesus as a youth was that he was a determined lad, who didn’t ask his parents’ permission when he stayed behind in Jerusalem when they returned to Nazareth. Mary and Joseph reacted much better than I would have! Jesus was taking care of business, taking charge of his life. Like Roma does.

Roma is not stingy with his apologies. After another clash fueled by cabin fever, he came to me, humbly, like a little boy and confessed, “I just want to say I’m sorry.” His repentant “I’m sorry” always mystifies me, from a confident boy who knows everything about everything. I am encouraged by the character it represents.

“Roma, I wish I could open the top of your head and pour in some of this wisdom I have gained in the years that it has taken me to become a dinosaur. Dad and I expect a lot of you because you are so gifted in so many areas. Before we are ready to let you go, you will be leaving us. We want you to be equipped to make it on your own. Kids leave home and forget the lessons their families try to teach. Many even walk away from their faith in God,” I warned.

Roma’s eyes narrowed as they met mine. “I could never not believe in God, after what He did for me,” he said with that faint Russia accent that most people no longer detect.

I stared at my beautiful, angelic son, stunned. Roma was thankful after all. On some level, he got it.

God has renewed my hope. Even when slammed doors separate us, I still consider Roma one of my favorite surprise blessings.

I am clinging daily to God’s promise, that He who began a good work will see it though, in Roma, and in me.

Thank you, Lord, for giving me hope. And Roma.
Posted by dbmichael at 2:55 PM