Continued from It is Finished

My last post, It is finished, was not the end of my blog, but it was a hard one to write. "It is finished" were Jesus' words on the cross, and when I discovered Roma's final actions and God's persistent warnings, it seemed clear to me that Roma's work on earth was finished too. I hope the post gave some of the 2050 (a new record, by far) page-viewers HOPE, as it did me to write it.

Many readers who shared their thoughts after reading were also heartbroken for Bobby, Roma's boss who witnessed the terrible accident. He was, rightfully so, profoundly shaken up.

I first met Bobby while welcoming visitors in a long line that crept toward us at Roma's visitation at the funeral home on the evening of December 13. Long before he reached us in that extended line of co-mourners and well-wishers, I recognized Bobby. As the unfamiliar man with swollen eyes and blotchy red face neared us, he occasionally sobbed, pulling out his tissues to mop his wet face. He was flanked by other people supporting him.

When he finally reached us, he was unable to speak for a moment. Then all he could manage was "I'm Bobby." Bruce and I both hugged him as Bobby all but collapsed into his sobs. "Bobby, it wasn't you fault," Bruce and I both tried to console him as he apologized for our loss.

He introduced his wife, brother, and sister-in-law who had come with him for support. We couldn't talk long because the line extended behind him, and we were mentally exhausted. 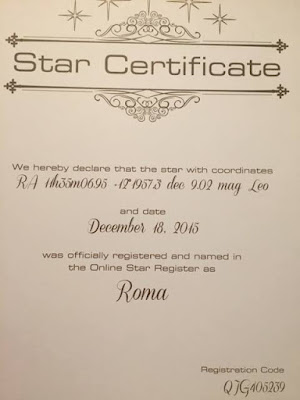 Bobby called us mid week, a couple of days after Roma's Celebration of Life to proudly report he had had a star named in memory of Roma. How appropriate that Roma would get to be a star. I had already thought of the comparison. Roma was like a shooting star. So bright and intense, but so fleeting. Bobby asked if he could visit with his wife and son. Bruce and I welcomed Bobby and his family, as Bobby, a kind and gentle man,  came bearing the star registry certificate and a vase filled with twenty-one pink roses. His wife came bearing a tin box with "Roma" on it. 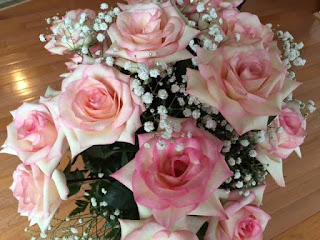 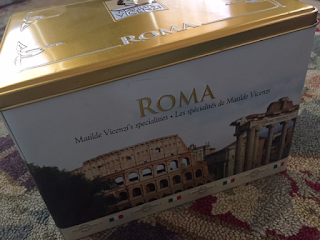 Someone had brought it to her office Christmas party, full of cookies, and she had asked to bring it to us. Their son, 14, came and shared that Roma had played basketball with him and he would really miss him.

Bobby and I have texted and talked on the phone numerous times. We met for lunch once, where we both cried at our table. But Bobby was eager to share a story with me. He and his father went to South Carolina for a fishing trip. One night Bobby awoke because his father had gotten up and sat on the corner of Bobby's bed. Bobby felt him there and swung around to ask if everything was okay. But no one was there. Bobby quickly turned over to check on his dad, who was sleeping peacefully in the other bed.  I asked Bobby if the otherwise creepy experience had comforted him. He agreed it absolutely had. He felt it was Roma.

Another friend shared a eerily similar story before I heard Bobby's version.  A neighbor who knew Roma better than she knew me visited and brought food a couple of days after Roma died. She was trying to be upbeat, but suddenly her face crumpled and she broke into tears. She apologized, saying she was determined not to cry.  But she missed our sweet boy who had been a friend of her son for a decade.

A week later I was returning her dishes. We stood and talked as I told her about the pink roses blooming on my red rose bush.

She looked at me sheepishly, and began hesitantly, "You're going to think I'm crazy." I assured her nothing would surprise me anymore. She shared that shortly after her grandmother died years ago, she felt her grandmother sit on the bed with her. She "knew" it was her. She never had that experience again when other loved ones passed away. Until Roma died. She explained that Roma had come by to visit her son days before the accident. While a group of boys were downstairs watching a football game, Roma came up, just to talk to her and her husband. Roma could talk to anyone, with his easy manner and eye-contact, he endeared himself to many parents. One parent said that Roma made them all feel like they were his favorite.

Just days later, Roma was dead. She said when they looked at the bar stool where Roma had sat days earlier, she and her husband both wept. The next morning, while she was still in bed, she felt her husband sit on the corner of their bed. She sat up to ask him a question, but no one was there.  Convinced he had been there, and still close, she called his name. He answered from another room.

She was looking at me to see if I could believe it might have been Roma visiting and comforting this family whose home he frequented since he was ten years old.

I confirmed that I believed anything was possible. Roma was still spreading himself around, making himself known. Comforting his heartbroken friends and family. Pointing to God.

A few months later, Bobby called me again to tell me he had another experience where he felt Roma sit beside him. He was sure it was Roma.

Almost identical  stories from people who likely will never meet, comforted by a little visit that God could allow. Always pointing to Himself. Their stories give me comfort too. I hope they do the same for the readers.

I'm not trying to tell spooky ghost stories. But I won't put God in a box either. He will not fit in my limited understanding of Him. I'm simply recording a phenomenon I can't explain. I know the  experience had the power to comfort. In His Almighty Power and Mercy and Grace, God has the freedom to do that.

Continue with Flesh and Blood.
Posted by dbmichael at 10:45 PM