Continued from Ladders and Doors.

The next day, Sunday, December 6, was a laid back day. We were staying at the lake until Monday, but hadn't told Roma. I always wanted him to think we could be home any minute. Bruce texted him to see if he was still working. When he said he was, Bruce told him to be very careful because he had fallen off a ladder the day before. Bruce was not sore the day after his fall. 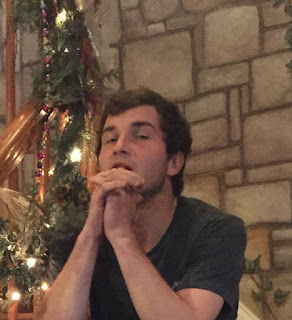 At 5:10 pm, my phone rang. I saw it was from a neighbor back home. For some reason, her call scared me. In the instant I was answering, I was hoping the call was about wall paint colors. I had helped Robin chose a color a few weeks earlier, and she said she would invite me down to see the room when she was done painting.

"Hey Debbie, are you at home?" Okay, this sounded exactly how our last conversation had started before she invited me over to tell her what was wrong with her paint color choice, and chose a better one. I was hoping she was inviting me to see the finished project.

"No, we're at the lake," I said with my heart pounding, hoping against hope she had paint on her mind. But her voice sounded strained.

"There is a police car in your driveway. He's been standing on your porch for a while, and looking in your windows. "

"I'm afraid something has happened to Roma," I blurted out. "I'll call you right back"

Nothing. As I listened desperately to the cosmos in which we had experienced profound connectedness, there was a terrifying silence in a universe minus Roma. I could no longer hear his spirit, no longer feel his energy. The frequency that ignited the invisible wires connecting Roma and me was severed. I knew he was gone.

I called Taylor who was at work, explaining the police in the driveway. I didn't share my sure knowledge of his brother.  He was going to head home to address the police officer.

I called Robin back, asking is she could go to my house and give the policeman my cell number.

A few minutes later, my phone rang. I handed it to Bruce because I could not talk. He put it on speaker as the officer introduced himself and confirmed my fear. "Are you the father of Roma Michael"

"There's been an accident. Your son fell from a ladder and sustained a head injury. He is on route to shock trauma in Baltimore. All I can say is he was breathing when they left. You can reach the hospital at this number."

I was already face down in a chair, on my knees, sobbing, pleading with God to rewind the afternoon. Please God, no, please, no, please no."

Like a caged animal, I paced as Bruce dialed the hospital. I tried to listened to the doctor over the beating of my heart. "Your son has sustained a devastating head wound. This injury is not compatible with life."

This injury is not compatible with life.

Somehow, I already knew that.

In total numbness, I went upstairs and packed our stuff to go home. Bruce called the couple who had invited us to dinner to tell them why we would not be there in an hour, as they were expecting. We walked around the house, and at 6:00, we both managed to find our way to the car. Shock Trauma and the University of Maryland was four hours away.

While poor Bruce drove in silence, I texted away, spraying prayer requests in all directions.  I hated to send text messages to my children, imagining their reaction as they read the grim details. But I didn't trust myself to speak. Bruce called a few people, a friend from church, Lucinda, who would get the word out, and his sister, Holly.  When I trusted myself to speak, I called my sister, Weegie.

It was not like the movies. We didn't cry in long jags. Only in short hysterical spurts. The four-hour ride was surreal, and much faster than I would have anticipated. Our friend Dawn had ask me to text her when we passed our home exit on the highway, because she was  going to meet us at shock trauma with another friend, Debbie.  Someone called to say our pastor Steve and another friend, Kathy were already at Shock Trauma waiting for our arrival.

When we parked and went to the family waiting area, I was in the fog that God must have devised for our protection. I remember talking to a kind and sympathetic nurse, telling her what an honor it had been to be Roma's mom.  I told Bruce that we were not going to have any guilt because we had loved Roma well. I was satisfied that he always knew he was dearly loved.

When our friend Kathy approached with a teary hug, she was wearing a bright green sweatshirt.  All I could think of was that morning, which seemed like years ago now, as the sun was breaking, and the color I had seen in the sunlight and on a door. Was there a connection? I told Kathy to remind me to tell her about that color sometime.

We were guided back to room number 7, where Roma lay. Bruce thought I might not like to go in and see him like that. But I had to see him.

He was so warm as I leaned over him, my arm across his chest, to talk in his ear.
Some of his friends called me, having heard the news or having called his phone that the police officer had left with Taylor. Taylor answered the constantly ringing phone and broke the devastating news to incredulous friends. His Fork Union friend, Ben, called, sobbing. I held the phone to Roma's ear so Ben could tell him what he wanted Roma to hear. Then a former girlfriend, Amanda called, having just heard. Then other friends called. How did news travel so fast?

We met with the doctors who confirmed Roma would not survive. They asked about organ donation.  He said that after a brain scan in the morning, they were determine a time of death.

How could we be calmly sitting around a table with strangers talking about such grim topics as brain death and organ harvesting in the same sentence with vibrant and beautiful Roma?  We headed home just after midnight, with plans to return in the morning.  Hopefully by then we could say this day had only been dream, a terrible nightmare.  But I knew there would be no such awakening.

"Okay, Bruce," I offered our battle plan, "the next couple of days will be the worst of our lives. But we can make it. Together. God is still good."

My Sunday school memorization came back to me.  The twenty-third Psalm. "Yea, though I walk through the valley of the shadow of death, I will fear no evil, for thou art with me. Thy rod and they staff they comfort me."


We slept fitfully. I was up often checking messages. Sending emails, answering texts.  On Facebook, hundreds of posts about Roma exploded on my news-feed. At first they were vague and cryptic, "praying for your family," messages. Private messages frantically asked what in the world was going on.

I suddenly remembered with a fresh wave of anguish,  Liana and Lia, Roma's first sister and aunt, who we had found less than a year earlier in Russia and the Republic of Georgia. We were now Facebook friends.  I didn't want them to learn on Facebook that we lost Roma, so soon after they found him.  One private message from one of Roma's other local mothers, Lynn, asked how she might help. I wrote back about my  concern about Roma's bio family learning on Facebook, without an explanation. She set to work asking Roma's friends to refrain from posting and/or remove their posts about Roma until I could get a carefully constructed message to Liana and Lia.

I didn't trust the online translator I used, for it often had odd translations. I composed a message as unambiguous and sensitive as I could and emailed it to Kellie to have a Russian-speaking friend translate it. As soon as I got that back, I sent Liana and Lia messages with the news I knew would break their hearts too.

Then I posted the news on Facebook to answer the growing concern and questions, and to ask for prayers.

Continue with Glory Train
Posted by dbmichael at 4:23 PM