Continued from Preparing for "Deployment."

I had some strange thoughts as I was grappling with the raw devastation of Roma's death. Those first few days I was not tethered to reality. My mind wandered to the outer limits. Roma could not be gone. There had to be an explanation.

The morning after the accident, we headed back to shock trauma after we got a call informing us that Roma had been declared legally dead earlier that morning. The fog of overwhelming grief those first few hours played cruel jokes on my mind that was isolated from reality. I had a sudden hopeful thought when heading out to the door—the head injury. I remembered something from the Bible about a fatal head injury, but the Biblical character came back to life. Maybe God was going to bring Roma back to life. God could do anything. Navigating the haze, I later remembered the character fitting that description was the antichrist, so I had to abandon that hope quickly.

But what came into the light over the next week was beyond weird. I have not wanted to share this information. But I have been completely transparent about everything, no matter how "weird," so I will share this too.

Many of Roma's Facebook friends might have noticed this detail on their newsfeed last May, and thought nothing of it. It defies explanation. Others shared his post from May, 2015 after Roma died.

When my daughters and their families returned from Wisconsin and Pittsburgh for Roma's celebration of life, our house was a buzz again with activity. I was so distracted and consumed with planning, I hardly ventured out from that protective bubble I inhabited those first few days and weeks.

One evening I was aware my daughters Heather and Kellie were talking privately. Their  hushed tones didn't invite me into their conversation. I was suddenly curious because of their furrowed brows and intense expressions, and I heard Roma's name mentioned and then the words, "And the timing was exact."

I butted in, "What are y'all talking about?'

They paused, as though what they were discussing might upset me. They glanced at each other and one let me in on their secret.

Did you see Roma's Facebook post a few months ago? Back in May?" As I was wondering what Roma had to say in May could possibly be relevant now, one of my girls got her phone out and found the post in question.

It was a test on Facebook Roma had taken and posted the results. Roma often took such tests. I never take Facebook tests. I'm not curious about what Disney princess I am or what color my aura is.  This one seems equally innocuous. A zombie apocalypse test.

As I leaned in to read the results of Roma test, Heather and Kellie shot puzzled looks at each other. Here is a screen shop of his result. 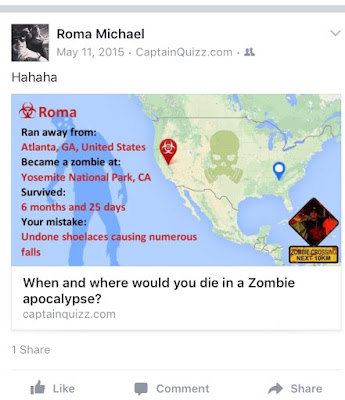 Counting six months and 25 days ahead puts us on December 7, the day the doctors pronounced Roma dead fifteen hours after his accident.
I was stunned. The exact timing. And the mention of "falls." Even a mention of "shoelaces." I flashed back to the morning of Roma's shoe lace breaking, and my near hysteria, when I had first considered the possibility of harm coming to him. I wrote about it in Succumbing to Hope.

I don't know what it all means. Maybe it is a warning of evil. Can it be a random coincidence? A friend always tells me I have the wackiest stories.  It is true. This same friend told me in a dream to "write all this down." I shared that in a post from 2014, Angels and Demons part one, before the really interesting stories began. All my "wacky" stories have illustrated God's relentless pursuit and amazing activity in my life. But this story doesn't feel like God's activity. But, because it is true,  I felt I must share it. I don't know how God will use it, but I trust He will. Maybe it will do no more than warn people not to dabble in those dark areas of "harmless" magic and fortune telling. There are evil forces at work in the universe.  And there is power in that evil.

I'm certainly not suggesting that the Zombie Apocalypse test had anything to do with Roma's accident. But I know that evil exists, and we should not play with it.

I continue to thank God for His comfort and pray for protection in this journey of grief. I pray our eyes are opened to see Him more! When the dark gets darker, the Light gets brighter.

The joy of the Lord is my strength!


Continue with Boys and Toys
Posted by dbmichael at 2:37 PM