Continued from Be Still, My Heart 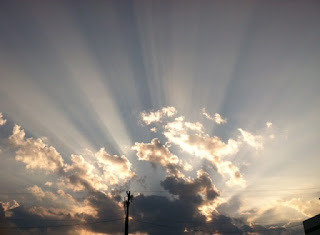 "I dreamed about a huge whirlpool last night." Roma shared one morning on the drive in to work. I stole quick glances at his serious face as I drove.  I could tell he was still seeing the swirling water as he recounted it. "I stepped out the front door, and," he swung his arms out in front of him in wide circular motions, "the water was high and rushing in circles."  After he told me he felt "something big" was coming a week earlier, I listened intently as he shared his thoughts, whether sleeping or awake.

His dream suddenly reminded me of my own. I shared the details with him. I was floating down a rapid river, observing crashed boats and trapped debris against the shore line on both sides. That was all. Just a scene of devastation.

Is there anything to our dreams? Sigmund Freud certainly thought so. So did the inspired authors or the Bible. I have experienced strange "coincidences" with dreams all my life. So when, in a dream, a friend told me to "write all this  down" two years ago, retold in Angel and Demons, part one, I knew it wasn't simply a suggestion. I am grateful to have documented the series of miracles that began the following days.

I went through a season about twenty years ago, before adoption was on my radar, when I had vivid dreams, often just a "picture" dream, a broken doll, for example, but I would see the exact thing the following day. If you are skeptical, just do an online search for something like "dreaming something before it happens." Many others report similar experiences. Yes, it sounds weird, and makes me hesitant to confess. And, no, there is no scientific explanation for those who believe science can explain everything. The strange experiences ultimately resulted in my heightened consciousness of Something out there, greater than myself. That awareness put me on a quest, though superficial at the start, because I was ignorant of the cosmic depth I continue to this day to plumb.

I never saw any shoreline destruction or a whirlpool in the days after our dreams At least not literal ones. While writing this post, I just searched for the "meaning" of the dream of whirlpools, though I'm not sure who interprets the meaning of dreams, or how they can be trusted for reliability or accuracy. Then I searched for my river dream.

I'm not going to get hung up on dreams and their meanings, although I will circle back to this at a later date. I'm acknowledging only that Roma and I were on the same frequency. There was a telepathy that connected us, with each other and with God. Years before I even knew there was a Roma, police delivered the playful, youngster (who was surely pushing buttons on the police car radio, maybe even asking to drive) to a Russian orphanage. As this was happening, God began His persistent Call for me to go get this boy! It took a while before I understood what was going on, and longer before I surrendered to a relentless, albeit benevolent Father-God whose ways are certainly not my ways. But I am thankful God saw some worthiness in me and potential to be transformed. The assignment of raising Roma was daunting, for sure, but an extravagant blessing for which I can only repay with future trust and surrender.

Merciful God kept showing me that Roma's and my bond meant something in life. And that bond would continue after death.

The topic of dreams will come up again in a later post. I Just wanted you to ruminate on the phenomenon for now. Please share if you have thoughts or have experienced similar encounters with dreams.

Continue with Thanksgiving
Posted by dbmichael at 9:59 PM