The Power of Quiet

A couple of years ago, at a family event, a man related to me by marriage engaged me in conversation. We live several hundred miles apart and I see him briefly every few years. The man, who I will call "Bubba," in his mid sixties, began telling me what good personalities he and his clone-son, mid thirties, possess. (I can write this post, confident neither will ever read it.)

Being an introvert, I just listened, occasionally day dreaming, processing his claim calmly and slowly. Being an extrovert, he continued to talk, (and talk) telling me bluntly that he considered a "good personality" to be the best attribute a person can have, elevated above all others.

Being conflict-resistant, I timidly offered that I prefer someone with "character," someone trustworthy, sensitive, and gentle.

My very extroverted, non conflict-resistant, and by this time "distant" relative pushed further for a response from passive me: "You only have one child with a 'good personality.' Only one of your four kids has a good personality." His eyes almost bulged with his bold pronouncement. Was he angry at me for not producing my share of class clowns?

As stunned and incredulous as I was, I don't think I gave my emotions away. How was I supposed to respond? Should I defend the honor of my children? Three of the four were adults, sensitive and intelligent. The only one I suspected he "approved" of happened to be the most challenging to parent at the time. The only child of mine he thought had a good personality had brought that fabled charisma with him all the way from Russia, and did not share any genetic data with me or my other children. Or with "Bubba."

For some reason this arrogant aggressive man wanted a response from me. We rarely talk, and he hardly knows my children, yet, as best as I could tell, he was insulting us. Being a conflict-resistant person who thinks, processes, and mentally rehearses before I speak, I had little visible reaction. I think he was offended that I was unwilling to have a loud dialogue about his opinion of himself and of my quiet, pensive children. After rehearsing in my head, I thought it best to remain silent. We parted pleasantly, on the surface, but that conversation has replayed many times since in my head.

I detested being shy as a young child. I longed to be bolder. I avoided at all cost being the center of attention. And the attention I did get was mostly positive because I was a rule follower and not a risk taker. I enjoyed being with people, and had close friends, but was more of an observer in groups than an entertainer. I was often content to be alone and express myself with writing. I haven't changed much over the years, except I don't consider myself as shy as I once did.

My children who share my genes are like me, and my husband, who is less of an introvert himself. Imagine how our lives changed dramatically when an extreme dictator extrovert in the small swaggering body of a seven-year-old boy invaded our quiet home almost twelve years ago. (Read our remarkable story in But the Greatest of These is Love)

When I read this article, 23 Signs You're Secretly an Introvert, I was intrigued. It was no secret that I am an introvert. But what did surprise me is, as recently as 2010, "introverted personality" was considered a "disorder" by the American Psychiatric Association. Thirty to fifty percent of the population is considered introverted, but the extreme introvert has a "mental illness" label?  How did the "extroverted" personality become the "Ideal" personality, as "Bubba" so willingly verified for me? Why were we willing to medicate "shy" people?

So I started reading (which accounts for my lack of blog posts lately!) There are volumes of recent studies on the subject. I read Quiet, the Power of Introverts in a World that Can't Stop Talking, a New York Times Bestseller. (Apparently I am not alone in my interest on the subject.) If you are not sure where you fall on the spectrum, this test might help you. There is also a middle ground, falling between introvert and extrovert status, called "Ambivert." 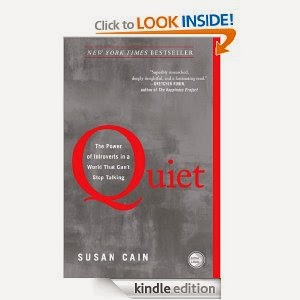 The book investigates the phenomena of the early Twentieth Century when the extroverted personality was revered above introversion, like "Bubba" pointed out. But as I read, I basked in the glory of being an introvert, a sensitive, harmony-loving "old" soul, a "thinker." For once, I felt "cool" being quiet and introspective, in good company with the likes of Rosa Parks, Eleanor Roosevelt, Gandhi!
One of my favorite quotes from the book: "There's a word for people who are in their heads too much: thinkers."

But my take-away from the book was not that introverts are better, though I did come away feeling more validated about the way God hard-wired me. The point? There needs to be a delicate balance of all types in order for society to work properly. I know that without my extroverted, "fun" friends, I might take myself too seriously. We might become extinct from boredom. But without introverted friends, extroverts might become . . . like "Bubba"! (I am guessing "Bubba" doesn't associate often with introverts!)

We need each other. And, as if there were a Master Plan,  personality traits seem to be distributed relatively evenly. After my "research" I better understand myself, my friends, and my children, the introverted ones, and the extroverted one.

I am thankful that a creative God foresaw the need to make us different.

Check out Quiet, and definitely read But the Greatest of These is Love. to get to know my resident extrovert, and the blessing his personality type brought to a quiet, unsuspecting family!
Posted by dbmichael at 3:32 PM

Email ThisBlogThis!Share to TwitterShare to FacebookShare to Pinterest
Labels: But the greatest of these is love, introvert, personalities, Quiet, the power of introverts in a world that won't stop talking