Downton Abby, for such a time as this

I rarely watch television. Occasionally restlessness or curiosity will drive me back to the idiot box. It seems like such a waste of time. (Unfortunately, it didn't take me long to find alternate activities on which to waste my time.) 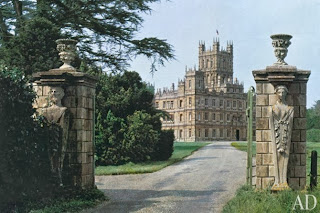 In 2010, my daughters independently suggested I give Downton Abby a try. The new PBS Masterpiece series had captured their imagination and reminded them of staying up late during their high school years watching almost six consecutive hours of A&E's production of Pride and Prejudice borrowed from our public library. We always vowed to watch one episode at a sitting, but rarely could discipline ourselves to that ideal. "One more episode" was usually muttered during the closing music, usually by me, and was met by no arguments.) (Colin Firth in lace collars is not to be missed!) True, Jane Austin's period novel precedes Downton Abby by a hundred years, but there are many similarities.

As Season One progressed in the life of the Crowley family, I kept forgetting to tune in on Sunday nights. Once the season was over, it was too late to jump in. For my birthday last month, my youngest daughter sent me the boxed set of the first three seasons. She was that convinced I would approve of and enjoy the program.

My daughters know me well. I went on strike from television years ago when the programs became idiotic. Downton Abby is not an "idiotic" show. It is sophisticated and intelligent. I have been watching two episodes an evening, when possible. I just finished season two, and I am wary of googling any information for this post for fear of spoilers!  I love Downton Abby for the same reasons I love Pride and Prejudice. The the scenery is beautiful, the costumes exquisite. The music, refined. And the characters have, well, character. They are people of integrity. When they act badly, they try to make things right. Of course Thomas and Mrs. O'Brien present artful antagonists, but they are real, in a literary and human sense.  The show is a refreshing alternative to the junk shows that drove me away from TV in the first place. I would like to believe that the enormous international popularity of Downton Abby signals a turning away from crass, crude, vulgar, and silly shows.

I admire Excellence. Watching the Crawley family and friends gives me a longing to return to a time when self-respect and respect for others was a way of life, even the respect of a perceived enemy. And to a work ethic, that drives one to do one's best, no matter how lowly the job, as we might identify service jobs of maids and butlers. To think of someone else's need more than ourselves is a high form of integrity. As is keeping oneself morally and sexually pure. These are archaic ideas in this era of "Self" being elevated above all else.

Does Downton Abby idealize the Victorian Era? Maybe. But my favorite writers from that era paint a similar picture of the the gentile worldview embraced at the time. In this Discovery article, Victorian Brits Were Smarter than Us, researchers describe the Victorian era as "an explosion of innovation and genius, per capita rates of which appear to have declined subsequently." In a former post, Unpopular Christian Virtues I found this same article valuable.


When I compare the sophistication and gentile manners of Downton Abby with some of current favorite movies, TV shows, in my humble opinion, the contrast confirms the Discovery article. I recently learned of these popular games this holiday season that add sad examples of our decline: Doggy Doo. (Really? So this is what we have come to?) and Gooey Louie. (Luckily, these games do not appear on the Christmas lists of my grandchildren!)

Trash in, trash out. Literally.

Maybe the success of Downton Abby signals a swing of the pendulum from the absurd toward Integrity. Maybe it will affect raising the bar of Excellence—excellence in media programming and excellence in personal integrity. It is up to us.

Posted by dbmichael at 3:48 PM