I am fascinated with Quantum Change stories. Read my blog post for an explanation.

In last week's post, Our Resourceful God I mention two Russian literary powerhouses, Leo Tolstoy and Fyodor Dostoevsky. Though they never met, they lived and wrote during the same period in the 19th century. Both men had interesting religious conversion experiences, which empowered them to affect spiritual awakening in a dark period into the future, during the Communist Soviet era.

I like the dramatic story of Dostoevsky (1821-1881), whose writings continue to show up on the lists of "top 100" novels of all time. Philip Yancey, best-selling American Christian author calls The Brothers Karamazov the greatest novel ever written. Anyone who has ever attempted, and succeeded, in slogging through the dense material (paragraphs can run on for many pages!) and heavy themes, (and keeping up with all those Russian names and nicknames!) is rewarded by an insight that is potentially life-changing. 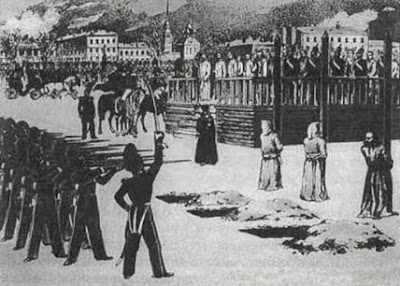 The young intellectual Fyodor was sentenced to eight years of hard labor for attending secret Utopian society meetings which the Czar Nicholas I believed were subversive. A few years into his Siberian imprisonment, he learned that his sentence, along with many other prisoners, had been changed to execution by firing squad. While Dostoevsky waited his turn, three prisoners, clothed in white burial cloaks, were matched in front of the armed men, kissed a cross offered by a priest, tied to a stake, caps pulled down over their eyes, and waited for the guns leveled at them to fire. The prisoners waited in cruel, exaggerated suspense. Then the guns were lowered and the caps removed. It had been a malicious hoax.

Dostoevsky immediately wrote his brother about how the experience had changed him:

"When I look back on my life and think how much time I wasted on nothing, how much time has been lost in futilities, errors, laziness, incapacity to live; how little I appreciated it, how many times I sinned against my heart and soul—then my heart bleeds. Life is a gift . . . I will be reborn for the better."

While still in prison, Dostoevsky was the recipient of a peasant's unwavering friendship. One day the peasant looked at Dostoevsky with overwhelming brotherly love, and another layer of Dostoevsky's soul was peeled away:

"When I got off the plank bed and gazed around, I suddenly felt that I could look on these unfortunates with quite different eyes, and suddenly, as if by a miracle, all hatred and rancor had vanished from my heart."

Dostoevsky went on to write some of the most powerful literature in the history of Russia, awakening a spiritual  yearning in future Russian intellectual heavyweights in the 1970s like Aleksandr Solzhenitsyn. Solzhenitsyn was exiled to the United States in 1974 because his writings raised global awareness of injustices in the USSR, for which he had earned the Nobel Peace Prize in 1970.

A great paradox. Out of suffering often comes life-changing insights and victory. One of Jesus' most repeated themes in the Gospels it that one most lose his life to save it, not physical death, but death of "Self," followed by rebirth in the Truth of God.

The most compelling "proof" of God? A changed life.

Email ThisBlogThis!Share to TwitterShare to FacebookShare to Pinterest
Labels: But the greatest of these is love, Fyodor Dostoevsky, Quantum Change