I am not a big fan of war movies. I spend most of the time shielding my eyes from the gore and violence. 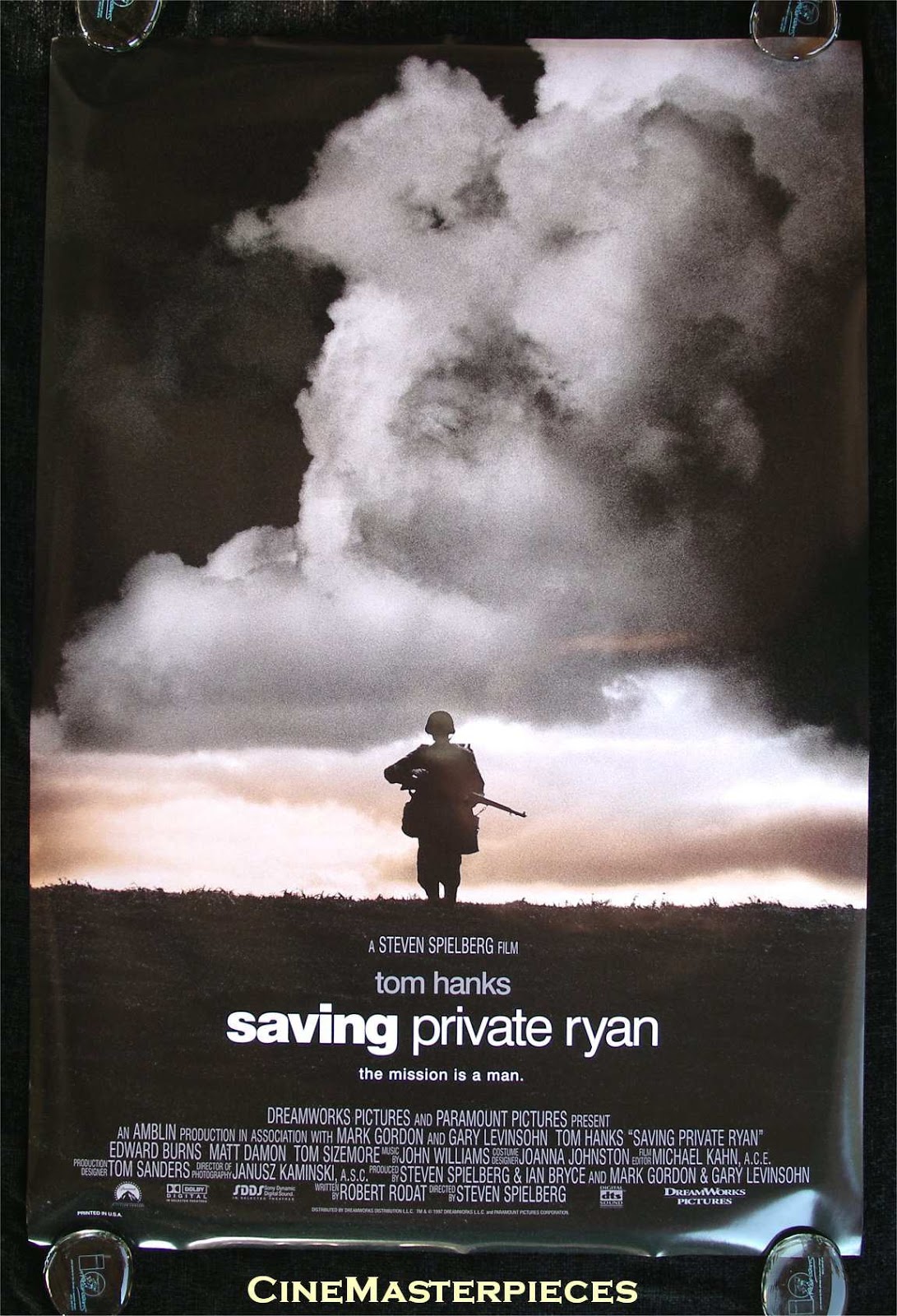 Saving Private Ryan is one of the few exceptions. Set during the Normandy invasion in World War II, Steven Spielberg's 1998 masterpiece chronicles the mission to find and remove from combat one Private James Francis Ryan (Matt Damon). Ryan's three brothers, all soldiers, have been killed in recent days in combat.  Captain John W. Miller (Tom Hanks) has the mission of locating Pvt. Ryan and returning him safely to his mother.  General George C. Marshall has issued the order himself, believing that three sons were more than  any mother should have to contribute to the war.

My favorite part was the end when the Allies stormed in for the surprise rescue, but unfortunately, too late to save Capt. Miller. As he lay dying, he struggles to leave Pvt. Ryan with one enduring directive, "James, earn this . . . Earn it."

"Earn this." Ryan's rescue came at a high cost. Of the eight soldiers commissioned to save him, only two returned relatively unscathed.

As Ryan kneels close to the dead captain, his face transitions to that of an old man visiting the Normandy American cemetery with his family, fifty years later. The elderly man kneels by his captain's grave. Ryan explains to Miller that he has tried to live a good life. He hopes he has. Unsatisfied, he turns to his family standing back. "Tell me I've led a good life . . . Tell me I'm a good man."

We instinctively understand why Ryan feels compelled to live a good life, as payment for the sacrifice of his captain and the others. But why is goodness the payment for the debt? Why not revenge, by killing all former Nazis?

While he was still an atheist, C.S. Lewis struggled with what he saw as a mystery, when confronted with what he called the "Law of  (Human) Nature" or the "Rule of Right and Wrong." He experienced an uncomfortable, nagging suspicion that he might be wrong about his belief in no god. He wrote in Mere Christianity that people seem to be appealing to a standard of behavior that all parties are aware of. "If we do not believe in decent behavior, why should we be so anxious to make excuses for not having behaved decently?" Where does this innate sense of decency or fairness come from? What is this standard?

I have recently joined an online "faith" forum where I can post my ideas along with others. I feel "called" to write. For God! No pressure!

I am amazed at the strong presence of atheists on these sites. They ask challenging, thought-provoking questions, present good arguments, provide videos expounding the wisdom of their gods, Richard Dawkins and Christopher Hitchens, and mentor vulnerable converts. Their have their own religion! Certainly atheists can and do behave decently. As a matter of fact, there have been studies that conclude that they behave better than people of faith.  But the question remains—where does this innate sense of honor come from? Evolution? Survival of the fittest? More thoughts on that another day.

"Evidence" from atheists will not sway me, even though they claim my experience with God, my testimony, is, at best, an illusion, and at worst, a contrived, manipulative hoax. Will we ever find common ground? One day.

Chuck Colson, in his excellent book, The Good Life, which inspired this post, wrote that we are "irresistibly religious."  A French philosopher unknown to me stated that human life is characterized by a "divine restlessness" which puts us on a quest for the meaning of life, a command imprinted on our "unextinguished souls."

We are all on the perennial quest for the meaning of life, and our purpose in it. Ironically that search for meaning is often what gives our lives meaning. We are all searching for something, probably because we are born with knowledge of the Truth, and a desire to know it.

Pope John Paul II summed it up succinctly, " One may define the human being as the one who seeks the truth."

A worthy pursuit!
Posted by dbmichael at 6:41 PM