I joined Facebook last fall for the sole purpose of promoting my new book, But the Greatest of These is Love. I had resisted earlier suggestions to join because I know myself well enough to know that I might spend too much time checking out the lives of my friends, acquaintances, friends of friends, etc. I have indeed had fun connecting with friends and reconnecting with friends who I last knew when we were literally kids.

At first I  timidly garnered enough courage to "like" someone's status. Then I inched out into new territory and posted a comment on someone's status. Still, I was tentative, posting, then immediately deleting, then posting same post again. Who cares what I think?, I would ask myself.  But I am over that now! Nobody cares what I think, but it doesn't matter!  That is not part of the rules. We just care about those little red numbers tallying our "likes" and comments.indicating that we are special.

And it isn't just Facebook. It is Twitter, online video games, instagram, constant texting, even when it seems rude. Technology! The savior and downfall of civilization. Finding and dissemination information has never been easier. I have discovered that I love to research, now that the capability is at my fingertips! The capacity for quick information may often be helpful," but as Einstein said, "information is not knowledge."

I've had to learn a whole new language with all initials, "new speak" I call it, reminiscent of George Orwell's 1984, where the totalitarian state reduced language to simplistic terms to limit free thought. (Watch for that blog that is ruminating as I write this one.) I had to learn "lol" did not mean "lots of love" as I was tempted to post to convey my compassion, when "laugh out loud" would have been grossly insensitive! There are several other letter combinations I haven't figured out, so I dare not use them!


I am over my early trepidation, and now I am confidently posting all the time, "all" being the operative word here. I am becoming a Facebook junkie. Now when I post something, I am eagerly awaiting someone to "like" or comment on my status. I have to step back. Sometimes after an out-of-control session lasting too long, I feel icky. Hours of my life gone for nothing. Has anyone else experienced this? I had to turn the "chat" feature off—I envisioned all the names scrolling down,  people liking, and becoming friends with, and commenting, sitting in front of the new idiot box in an alternate universe, along with me, instead of talking face to face with a flesh-and-blood friend. How alien this concept would have been only a decade ago, except to Rod Serling/Twilight Zone aficionados.

The Twilight Zone, young ones, was a science-fiction (or, in "new speak," Sci-Fi) television show that 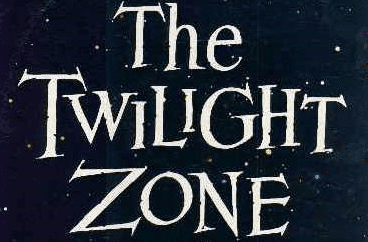 aired on CBS from 1959-1964. Its paranormal, futuristic, and disturbing events inspired a few reoccurring nightmares during my lifetime. It always opened with the creator, Rod Serling cryptically inviting, "Imagine if you will . . ."

In all of our "connectedness," we have isolated ourselves. So here we sit, face to Facebook. Welcome to the Twilight Zone.