A Glimpse of Grace

The next morning I was distracted at church, wondering where Roma had spent the night. Although he was now twenty years old, he did not demonstrate the maturity of the average twenty year old. Had he eaten? Had he slept? Was he afraid? Was he safe? I had no power to change his circumstances.

As I was leaving church, I checked my phone. One text from Roma, "I saw your friend Beth this morning at church."

What? Church? Beth was a Facebook friend through adoption who I had the pleasure to meet in person in July, despite the unpleasant reason for being in Atlanta-- Roma's disorderly conduct trial.

"Roma, where are you?" I tapped out quickly.

"I'm with a family. The mother wants to talk to you. When will you be home?" I was utterly confused. I called Roma when I got home. I was eager to hear his latest story. He knew I was disappointed that he had not persevered in the treatment center. "Mom, I just couldn't stay in that group home. They all spoke Russian. They had to get a translator for me."

"Roma, that was very nice for them to make those provisions for you. They were trying hard to help you."

"Mom, you don't know what it felt like to hear everyone speaking Russian again."

When the weight of that revelation hit, it was like a kick in the gut. The last time Roma heard everyone speaking Russian, he was seven years old and living in a Russian orphanage.

When he realized that Edward had really left him, he reached out to Nancy first for help, but she, like me, clearly felt she wasn't to help him. He texted and called everyone he knew in the Atlanta area. Apparently someone answered his SOS.

Before this new mother figure in Roma's life called me, I got a message from Beth. She was intrigued to see Roma again, with friends of hers, and at her church. She added that they were Godly people. I was astounded by the interconnected-ness of Roma's friends and adventures. God is always whispering to me, "Do NOT miss My involvement!" Frankly, it would be difficult not to see it!

Ella called later that afternoon to introduced herself. Her son Henry had gotten a text from Roma because they had both gone to Idaho together. At first I thought her son might be adopted too, but Ella explained that Henry had gone on the trip in July as a family friend, as "mission work."

As I was processing Roma's latest bounce along that "Rock Bottom,"  I remembered my strong conviction to allow Roma to land without my safety net, which was confirmed by Nancy. The entry of this new family into our story was not what I was expecting.

I thanked Ella for her kind heart, but added, "Unless you feel called by God to take him in, take him to a homeless shelter."

Ella paused for only a moment and then said, almost surprised herself, "Actually, I think I do feel Called by God to take him in for now. It's what Christians are called to do."

Ella explained that she did not blame me for my son's circumstances or my resistance to help him. He had explained to them, at least his side of the story, about getting kicked out of the treatment center and being left alone at Walmart. That detail really seemed to tug at her heart.

Ella said she could actually offer Roma a temporary employment as she was in need of some help for the holidays. Decorating for Christmas was her job. Ella said her husband was very structured and strict. He had already had Roma remove his earring. She said my strong-willed boy had offered no resistance.  I remembered Roma's positive experience with structure at Fork Union Military Academy (except for dipping tobacco.)

So it sounded like God had Roma right where He wanted him. Again. God met Roma around every corner.  Roma's Facebook status that night revealed that he, too, saw God's involvement in the recent turn of events:

"Truly I say my eyes have been opened to the one and only Jesus! He has blessed me and I thank God for my situation I am in to see what his love will provide. No other way I wanted it to be done. I am his humble servant. What a good end of the night. May God bless you." (Roma's Facebook post from November 1, 2014 is still posted, and his 2373 friends can see it.)

Ella occasionally emailed updates about his progress, his interactions with their family, his behavior, and willingness to help. Surprisingly, it was usually good news. 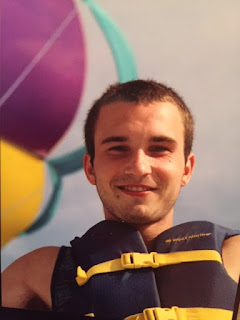 For Thanksgiving they attended a family reunion in Key Largo, with Roma in tow. They camped out. Ella was pleased to report that Roma was very helpful putting up tents and playing with the younger kids. I saw photos of him parasailing and carrying small children on his shoulders. I even got a Christmas card from Ella, a photo of the whole family, including Roma, sitting in the group like he belonged there. His name was even included among the mother and father, two brothers, and a little sister. 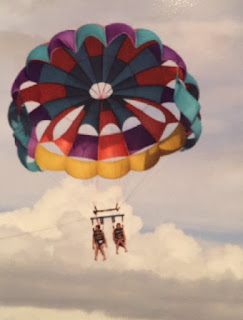 Nancy, encouraged by his new attitude, took him to a David Crowder concert one evening with her family. And she also surprised him with a ticket for Passion 2015, a Christian Conference. Twenty thousand 18-25 year olds would be converging on downtown Atlanta for the three day event scheduled for January 2-4.

Roma, so lovable, insinuated himself seamlessly into other people's families.

He came home for Christmas on a bus on December 20. He seemed peaceful and content. He was returning to Atlanta for the Passion conference and after that, he was going back to Ella's family to help her with her Christmas-decorating business, this time to reverse the process. She said she could keep him busy for about a month. I was living one day at a time, and couldn't think what might come after that.

Life for Roma seemed to be on track. I praised God for His unending mercies. It was a joy to have all our children and grandchildren home for Christmas. And the joy expanded, when right after Christmas, on December 29, we found his sister Liana. As much as he didn't like me to make a big deal about the discovery, it was evident he was profoundly moved by the discovery. Finding Liana, and then an aunt, Lia and other family members gave Roma a truer sense of "Identity," and answered questions that would no longer torment him.

The year 2014 had been a roller coaster. Roma's many adventures had achieved a sacred mission. Roma had seen God, up close and personal, many times. We all had. Roma's mind was "all in" for God. On a intellectual level, Roma "got it." His heart, however, like all our hearts, was deceitful above all things, couldn't always be trusted.

I remember reading about Saint Augustine who was quite the playboy in his youth--I bet Roma and young Augustine would have been friends. Augustine said he had two conversions. The first came at age nineteen. A more complete transformation happened at age thirty. About his first conversion, Augustine confessed that while his lips were praying "Lord made me chaste," his heart was adding, "But please don't do it just yet."

Yep, that was Roma. That would also describe many of us.

I am confident Roma knew God more intimately at that time than some people many times his age. He never denied God. He freely discussed God's Love for him.

It boggles my mind how people can deny the existence of this redemptive and personal God who we have come to know. They might as well say to me, "I've never met this Roma you speak of, so I am sure he is a figment of your imagination."


Faith is not blind. But one does need to open their eyes to see! 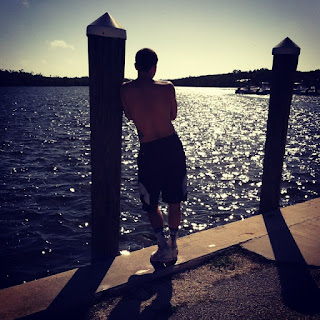 Continue with Loved with a Passion

Posted by dbmichael at 7:17 PM